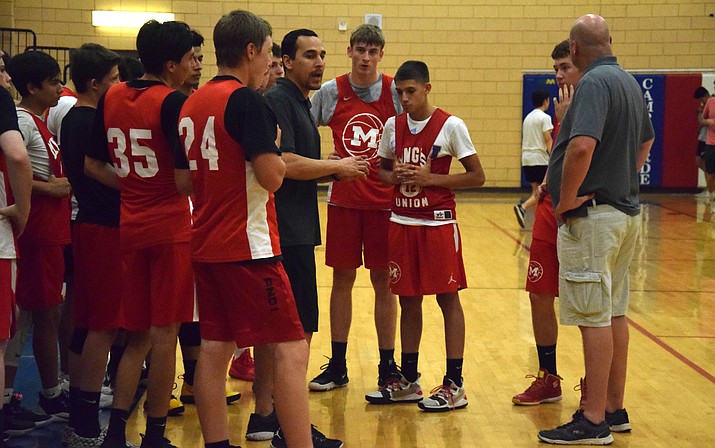 First-year Mingus head coach Albert Rodriguez addresses the Marauders during a time out at Camp Verde in June. VVN/James Kelley

Mingus Union boys basketball lost a lot of star power from last season but a slew of seniors inspires confidence that the Marauders can return to the postseason.

“We got four seniors returning, so that’s definitely helped the process a little bit,” Rodriguez said. “They’ve done a great job of leading by example and setting a good tone and good pace for our practices. So our seniors are doing a good job of staying focused and they’re a good group of leaders”

“We definitely got solid production out of our seniors last year,” Rodriguez said. “I think this year if we could focus on consistency, I think we’ll be able to kinda fill the shoes just fine. We’ll be a little bit more spread out this year as far as our scoring goes but that kinda fits right in with our team concepts and the principals that we’ve been talking about over the past few months as far as playing together and sharing the ball and just playing simple basketball.”

Last year’s Grand Canyon coach of the year David Beery stepped down put praised Rodriguez, who served as an assistant for years. Rodriguez graduated from MUHS in 2002.

“He’s got a great mind for the game,” Beery said in June. “He sees things that I didn’t especially on the offensive end of the court, so it was nice to have him at practice and I’m glad that he gets a chance to show what he can do to the school and the community.”

In addition to the four seniors returning from last year, the Marauders added two more, Luke Doerksen, who didn’t play his junior year at Mingus Union and Anthony Richarte.

“He’s a strong kid and gives us a very strong presence, works hard and is very coachable,” Rodriguez said about Doerksen.

Richarte is a wing who can handle the ball.

“He’s going to be playing on the wing, kinda helping us get into our offense and he’s a very skilled player and we just want to get everybody to play the same brand of basketball so we can just continue to develop that chemistry,” Rodriguez said.

Last year the region had three teams make it to the postseason but Mingus Union, Lee Williams and Bradshaw Mountain all lost in the state play-in.

“The region I don’t think is going to be very top heavy or bottom end heavy,” Rodriguez said. “I think pretty much all of our region schools are kinda in the same boat as far as losing one or two top scorers and being young and competitive .There’s not going to be too much drop off that I see with any program.”

The Marauders open the season on Tuesday when they host Buckeye Youngker at 7 p.m. Peoria and Glendale Deer Valley also come to town, on Dec. 3 and Dec. 20 respectively.

Last year Deer Valley finished second in the state and Peoria, which knocked Mingus out of the tourney in 2018, made it to the first round of the state tournament.

“As far as our non section games, we’ll definitely see some good schools,” Rodriguez said. “We got Peoria and Deer Valley coming in here, so that will definitely be an eye opener and a good gauge for us, it will be good to see two quality teams early on and we’ll definitely learn a lot from those games.”