Pedestrian dies after being struck in Uptown Sedona 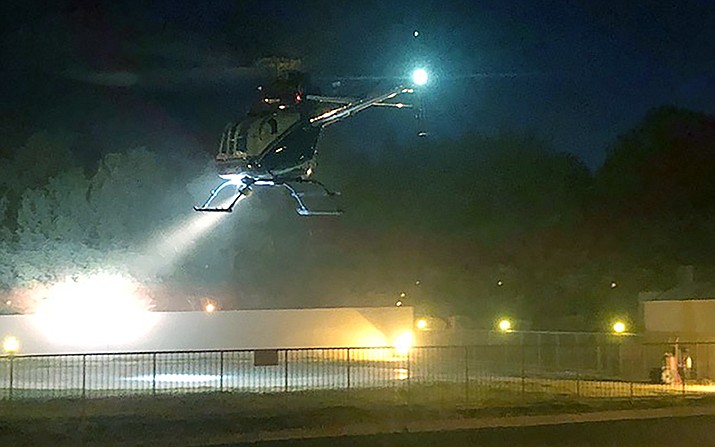 According to a news release, a pedestrian who was struck by a vehicle in Uptown Sedona on Friday, Nov. 15 died about five days later, despite being transported by helicopter to a Flagstaff hospital. Courtesy of Sedona Fire District

SEDONA -- According to a news release, a pedestrian who was struck by a vehicle in Uptown Sedona last week has died.

The Sedona Police Department said Thursday that an accident happened Friday, Nov. 15, just before 6 p.m. at Jordan and Capitol Butte roads in Uptown, in which a pedestrian was allegedly walking down the middle of Jordan Road.

The victim was struck by a vehicle, and, despite being transported by helicopter to a Flagstaff hospital, died five days later.

“The pedestrian was wearing dark clothing and was not carrying or wearing lights,” Sedona Police Lt. Stephanie Foley said in the news release. “The driver told police he was not able to see the roadway briefly because of the headlights of a vehicle passing in the opposite direction.”

The pedestrian was airlifted to Flagstaff Medical Center with the assistance of the Sedona Fire District.

At the time of the accident, the release states, police administered field sobriety tests to the driver at the scene and did not observe signs of impairment.

The driver voluntarily submitted a blood sample for testing by the Arizona Department of Public Safety.

No citations were issued at the scene; the investigation remains ongoing, pending blood test results from DPS.

The release says this was Sedona’s first pedestrian-vehicle fatality in 13 years.

“It’s a tragedy,” Foley said. “We encourage everyone to be aware of safety when walking near roadways, especially this time of year when there is less daylight.”

Motorcycle/pedestrian accident sent to county attorney for review; victim listed in ‘stable’ condition
Child hit by vehicle, driver later dies
One woman dies after 13-vehicle collision on I-17
Pedestrian struck by vehicle
Man airlifted to hospital after being hit by car (see video)