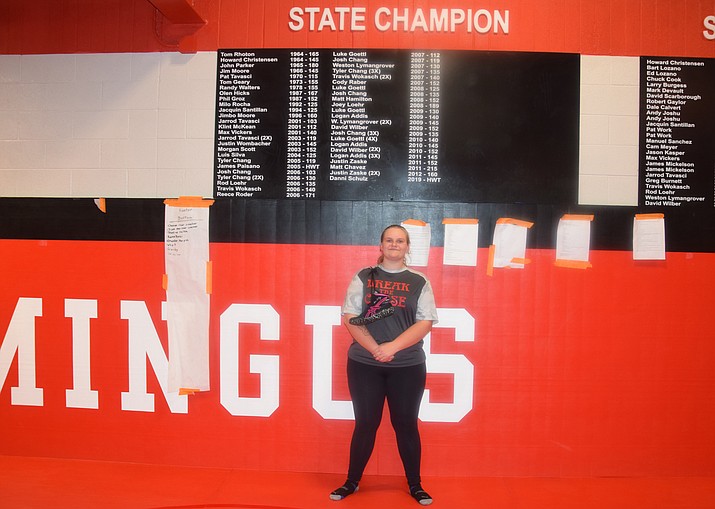 When Mingus Union wrestling head coach Klint McKean looked for someone to head up the growing girls team, he knew just who to turn to.

Danni Schulz, who won a state championship in 2018-19 and graduated IN May, joined the Marauders’ staff to lead the girls team.

“Last year being the first year that we had a girls team, we knew even though we only had three girls come out, that there was potential to really grow our team and we wanted to give those girls the attention that they really deserve,” McKean said. “So we figured we need a girls coach and why not have our girls coach be a woman, a girl that’s been through it and knows what it’s like and Danni was the obvious choice.”

“I was really excited because I want the girls program to grow,” Schulz said about becoming a coach. “I want Mingus to be known for their girls and I like that I kinda started that, like a little snowball effect.”

“She’s got some good mentors there in Klint and (assistant coach Mario) Chagolla (Sr.), even (assistant coach) Dave Wilbur, there’s some really good guys there that really know a lot about wrestling that will be able help her and help her develop into a really good coach,” DeVore said. “So we’re really excited to have her.”

Schulz said the current Marauder girls had a little bit of shaky start but are doing well now.

“They’re starting to really get it now, they’re really kicking in and moving into gear,” Schulz said.

In 2018, Schultz won the club state championship with three pins. At Sectionals in 2019, she pinned her way to the title.

“It really helps with the credibility (laughs),” McKean said about a state champion coach. “A wrestler or any athlete, would feel more comfortable knowing that their coach has achieved what they’re trying to get to, so I think that’s helpful and they look up and they see her name on the state championship board alongside the guys and that goes a long way.”

However, McKean, who won a state championship in 2001, said sometimes it can be difficult for elite athletes to get into coaching, that they need to figure out what’s best for the kids.

“It’s harder than I thought it was going to be, because I’m used to more advanced moves like throws and stuff and it’s been a long time since I’ve done the basics,” Schulz said. “So it’s hard to remember them all and teach them step by step.”

After having two girls wrestlers last year, the Marauders are up to about six and hope for more.

McKean said Schulz pulls the girls aside after practice and meets with the, building personal relationships.