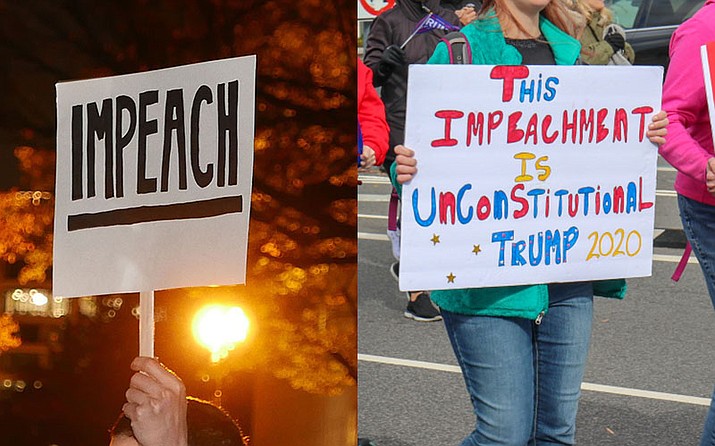 Two months of impeachment investigation, including weeks of televised testimony, does not appear to have shifted opinions of voters or lawmakers. But experts say that may change in the next round. (Photos by Photo by Susan Melkisethian and Megan U. Boyanton/Cronkite News)

WASHINGTON — Two months of investigation and two weeks of televised hearings do not appear to have changed any minds in Arizona’s congressional delegation about the potential impeachment of President Donald Trump.

The proceedings seem instead to have cemented the opinions of each side, with Republicans calling it an unfair process and Democrats saying the hearings have laid bare the president’s abuse of power.

“Quite frankly, most people are sick of it,” said Rep. Debbie Lesko, R-Peoria. “Most people when I go back home, they’re like, ‘This is such a waste of time,’ and they think that Congress is doing absolutely nothing.”

Where Lesko sees a waste of time, Rep. Raul Grijalva, D-Tucson, sees further proof that Trump should be impeached.

“The public hearings provide us with ample evidence into the president’s conduct,” said a statement from Grijalva, one of the first in Congress to call for impeachment. “He abused his power and jeopardized our national security by withholding congressionally appropriated military aid and extorting Ukraine into opening an investigation into a political rival.”

The two Congressmen whose districts include parts of the Verde Valley have taken decidedly different approaches to the hearings.

Rep. Paul Gosar, the Republican whose Fourth District includes Cottonwood, Clarkdale and Jerome, has taken a lighthearted approach to the hearings on Twitter, retweeting ridicule of Lt. Col. Alexander Vindman, "fartgate," and gaining a few days' worth of notoriety for 23 tweets critical of the process, in which the first letters of each of the tweets spelled out "Epstein didn't kill himself," continuing a popular recent internet theme.

O'Halleran hasn't tweeted about the impeachment hearings at all, focusing instead on his work on rural Arizona issues, such as the lack of OBGYNs in his district, environmental concerns and the work of his Energy & Commerce Committee.

One expert said it is still “too soon to tell” the outcome of the impeachment inquiry, noting that there are still several more steps — and hearings — in the impeachment process. But recent polls show that, for the moment at least, voters appear to be just as set in their ways as lawmakers.

A recent NPR-PBS Newshour-Marist poll showed that 65 percent of Americans say they cannot imagine any information or circumstances that might change their minds about their position on the impeachment.

That online and mobile phone poll contacted 1,124 adults from Nov. 11-15 and has a margin of error of plus or minus 3.5 percentage points.

Another poll by Emerson College shows that support for impeachment dipped slightly from 48% in October, before the hearings began, to 43% since, with the biggest drops among independents. The polls of 1,000 or more registered voters had margins of error of plus or minus 3 percentage points.

The impeachment inquiry began after a White House whistleblower raised concerns about a July 25 phone call between Trump and then newly elected Ukrainian President Volodymyr Zelensky. He was seeking both a meeting with Trump at the time and U.S. military aid to deter Russian aggression.

According to a partial transcript of the call, Trump asks Zelensky to “do us a favor” and investigate claims that Ukraine may have interfered in the 2016 U.S. presidential election. He also asked for an investigation of former Vice President Joe Biden, a possible Trump challenger in 2020, and the role of his son, Hunter Biden, on the board of a Ukrainian energy company.

Critics said that amounted to Trump threatening to withhold aid in exchange for Ukrainian interference in a U.S. election. Trump and his supporters say it was nothing more than the president trying to pressure Ukraine to clean up corruption in its own system.

The report was enough for House Speaker Nancy Pelosi to call on Sept. 24 for an impeachment inquiry, saying Trump betrayed his oath of office with the Zelensky call. That kicked off several weeks of closed-door hearings by the House Intelligence, Foreign Affairs and Oversight committees.

On Oct. 31, the House voted largely along party lines to approve the process for open impeachment hearings, which started last week and wrapped up Thursday.

Lesko said Thursday that since the inquiry began, she hasn’t found any Republicans in the House who have changed their position on whether the president should be impeached.

“Republican members that are more moderate, that more often than others vote with the Democrats, they are opposed to this too because they see it as an unfair process,” she said.

Lobbying has been intense on both sides. When Sen. Martha McSally, R-Ariz., left an unrelated hearing Wednesday, for example, she was chased by members of Common Defense, a veterans’ group opposed to Trump’s policies.

“We wanted to ask Senator McSally who is an Air Force veteran … if she thought Donald Trump lived up to the oath that he took when he became president,” said Kathryn L. Smith, a Phoenix-based organizer with the group. “We believe he is not doing that and as a commander in chief, we want to hold him accountable for things he has done or not done.”

The group hoped to convince McSally to look at the facts and withhold judgment until articles of impeachment reach the Senate.

Some Arizona lawmakers insist they are doing just that: Rep. Greg Stanton, D-Phoenix, said Thursday he will wait until the investigation is completed before deciding whether Trump committed an impeachable offense.

Katrina Mulligan, managing director of national security policy at the Center for American Progress, said it is too soon to tell what impact the eight-hour-a-day impeachment hearing coverage might be having on the public.

“One issue is that we don’t have enough information,” Mulligan said. “It will not surprise me if, at the end of the day, the American public is divided along the same lines that we kind of see in the general political dynamic, quite frankly along where they get their news.”

Mulligan also noted that there is still a long way to go in the process. Rep. Adam Schiff, D-Calif., and chairman of the Intelligence Committee, said in a closing statement Thursday that the committee will decide whether Trump’s actions “are acts compatible with the office of the presidency.”

If the three committees involved in the investigation confirm articles of impeachment, those would be sent to the House Judiciary Committee, which would decide whether to forward the articles to the full House for an impeachment vote.

If that happened, the impeachment would move to the Republican-controlled Senate, which would hold a trial and determine whether or not to remove Trump from office.

For Lesko, who is a member of the Judiciary Committee, it means the potential of a long December in Washington deliberating the articles of impeachment.

“I’m anticipating I’m not going to have any Christmas vacation except for Christmas Day itself,” Lesko said. “I’m expecting that we’ll be here in Judiciary Committee probably morning until late night in these impeachment hearings, debating back and forth.”