Jerome is an odd place to run garbage 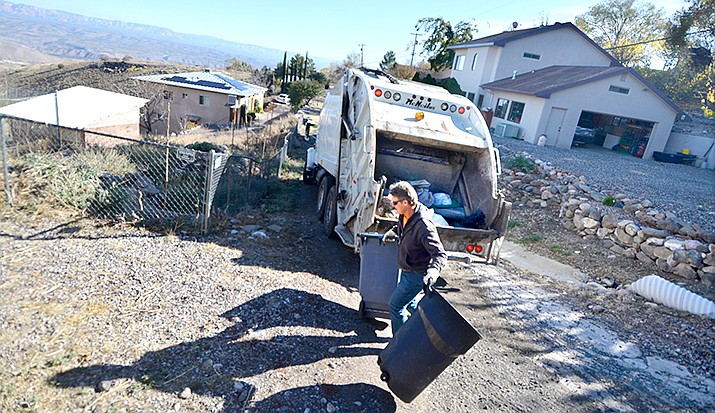 Troy Marsh loads trash into the Town of Jerome’s garbage truck on Monday morning. Collecting trash on the steep streets in the area is a challenge, but one that gets easier with practice. VVN/Vyto Starinskas

JEROME — The garbage truck’s engine roared as its wheels ground up the steep hill lugging a load of Jerome’s trash with a worker clinging to the back.

Jerome houses and other buildings were built on a steep mountainside around the start of the 20th century during the boom of the copper mining days. Picking up trash in a town built on a side of a hill with narrow streets and winding roads can be a challenge.

“Everything about Jerome is unique,” explained Jerome Public Works Director Marty Boland. “So we just adapt to the uniqueness of it — and the trash is one of it.”

“The hardest ones (streets) are the ones you have to back up,” Boland said referring to the 36-foot garbage truck. “Once you get used to it, none of them are really hard.”

Jerome does not have private haulers for residential and business garbage pickup like most Verde Valley communities. The Department of Public Works employees pick up the trash in the town-owned garbage truck and flatbed pickup.

Private trash haulers have turned down hauling in Jerome because the streets are too narrow and too steep, Boland said “We have to back up a bunch of roads  in order to be able to service them with  trash, and people don’t’ want the liability of backing up these narrow roads,” Boland said.

Private haulers would want to haul in one day, while the town collects trash three times a week, he said.

Public Works uses a flatbed pickup truck to get up the more difficult streets and transfer loads of trash to their garbage truck, which goes to a transfer station in McGuireville.

Boland said before the town had a garbage truck, the town used a pickup. They had an old stake-side truck, maybe a Dodge, that “they’d drive around, pick up until the truck was full, bring it out to the dump, come back, throw more in.”

Boland said Town of Jerome has always hauled their own trash as far as he knew.

Jerome residents pay through their town fees to have their trash picked up, Boland said. And they get to every road in town, which can be a challenge with a garbage truck, he added.

The town also has five trash dumpsters around town for businesses to use, he said. Residents have their trash picked up on the curb in front of their homes. There are five bins in town for recycling cardboard and a recycling trailer for bottles and cardboard across from the Spirit Room, he said.

“In Public Works, we do everything. Everybody, even myself, has to do trash,” in a tiny community where the Public Works that has six employees, the director said.

It’s not unusual for Jerome employees to fulfill many roles in the town. As an example, police have been doing EMT training to assist the fire department.

The Public Works employees also work on street repair, sewer lines, potholes and vehicles, but on Mondays, Wednesdays and Fridays, they maneuver the town’s lone garbage truck through town.

Boland said they are also providing a little bit of that “curbside” service for the elderly and other residents. “We know the people that might need the help,” he said.

Boland said their garbage truck has never gotten stuck on the Jerome hills or tight streets, but once, it broke down, and they used every pickup they had to collect the town’s trash that day.

“We do (the steep) Gulch Road (area),” Boland said. “We service every road that we can get down to with the garbage truck. And the ones we can’t, we get with the flatbed.”

“It’s an odd place to run a garbage truck, but easy once you learn it.”

Commentary: Business of recycling follows parallel path of trash collection
Commentary: When it comes to garbage, there is no shortage of trash talk
More than 200 at work session on trash hauling
Commentary: Free enterprise spells end of government subsidies for recycling
Cottonwood explores waste, recycling options