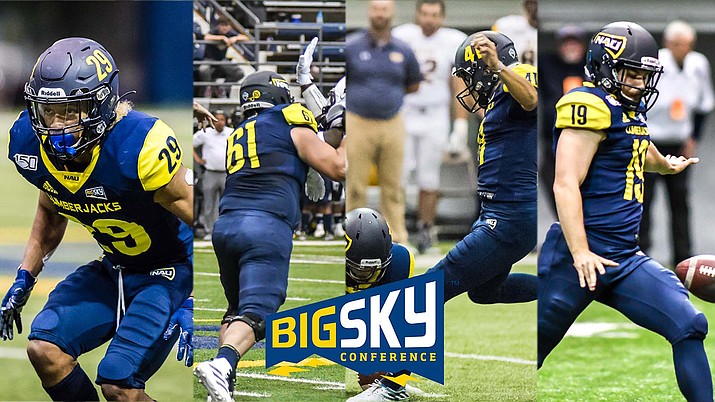 FLAGSTAFF – Seven members of the Northern Arizona University football team were selected to the All-Big Sky Football Teams, which were announced by conference officials on Tuesday.

Habib anchored an offensive line that formed the front wall in front of the nation’s top-rated passing attack this year – and allowed only 18 sacks. Habib started a total of 39 games in his career, including the last 34 straight in which he was active.

Dorsey, a four-time All-Big Sky and two-time All-Big Sky first team choice, has been a perennial playmaker in the NAU secondary for the last four seasons. The senior cornerback ranked second in the conference this season with 12 pass break ups and fourth on the squad with 68 tackles. He also forced a pair of fumbles and recorded seven or more stops in six contests. He closed out his career with eight interceptions and 41 pass break ups.

Arnson, a two-time All-Big Sky selection, earned first-team recognition for the first time in his career following a junior campaign that saw him lead the Big Sky and rank third among FCS leaders with an average of 45.8 yards on 57 punts. The two-time Big Sky All-Academic winner also booted 16 kicks over 50 yards and placed 19 inside the 20-yard line.

Arnson is on the watch list for the Ray Guy Award, which is presented annually to the top punter in FCS football.

Aguilar enjoyed a breakout 2019 season which saw him lead the Big Sky in field goals per game (1.83) and rank second with a make percentage of 88.0 percent. He made 22-of-25 attempts on the season – with only one miss from under 50 yards. He nailed kicks from 57 and 54 yards this season – the blast from 57-yards out was the longest field goal made by any FCS player in 2019.

Aguilar was also perfect on all 52 of his extra-point attempts and led the conference with a total of 61 kickoff that went for touchbacks. He is on the watch list for the Fred Mitchell Award, which honors the top kicker in NCAA FCS, Division II, Division III, NAIA and NJCAA college football.

Cookus was named second team all-conference following the most prolific passing season in NAU history. The senior signal caller broke the Lumberjacks’ single-season mark for passing yards with 4,114 and tossed 31 touchdowns. He was just the 10th player in league history to reach 4,000 passing yards in a season.

In addition, Cookus became NAU’s all-time leader and just the fourth player in Big Sky Conference history to post over 12,000 career aerial yards – with his total of 12,082. His 105 career touchdown passes rank as the most on NAU annals and he is only the second player in Big Sky history to record 100 or more TD tosses.

In 2019, Cookus threw for over 300 yards in nine times and threw at least two touchdown passes in nine games.

He was among the national and Big Sky leaders in nearly every passing category including topping the FCS in passing yards (4,114) and passing yards per game (342.8). He paced the conference and ranked sixth nationally with 31 touchdown passes and ranked second in the league in passing efficiency (150.5).

Cookus is a two-time All-Big Sky selection is among the candidates for the Walter Payton Award (offensive) and the FCS Performer of the Year (all positions) – both of which honor the top player in the FCS.

Porter enjoyed one of the best receiving performances ever by a Lumberjack in 2019. The sophomore was the top aerial target for the ‘Jacks as he ranked among national leaders and led the Big Sky in both receiving yards (1,198/5th in FCS) and receiving touchdowns (10/19th in FCS). He also hauled in a total of 85 catches –which set a new single-season standard in the NAU record book.

Logan was a dual-threat all season for the ‘Jacks on the offensive side of the ball. Showing a nose for the end zone all season, Logan ripped off a total of 20 touchdowns – 14 rushing, 6 receiving – to rank fifth nationally and second among Big Sky leaders. He closed out his NAU career as the program’s fifth all-time leading scorer with 228 points.

The senior amassed 860 rushing yards and added another 497 receiving on 40 catches. Logan tabbed 100 or more rushing yards in three of the final four games in 2019 and recorded a pair of 100-yard or more receiving efforts.

Logan scored multiple touchdowns in six games this past season and registered at least three a total of five times.

The Big Sky All-Conference team and individual award winners were selected by all 13 head football coaches. Coaches were not allowed to vote for their own players.