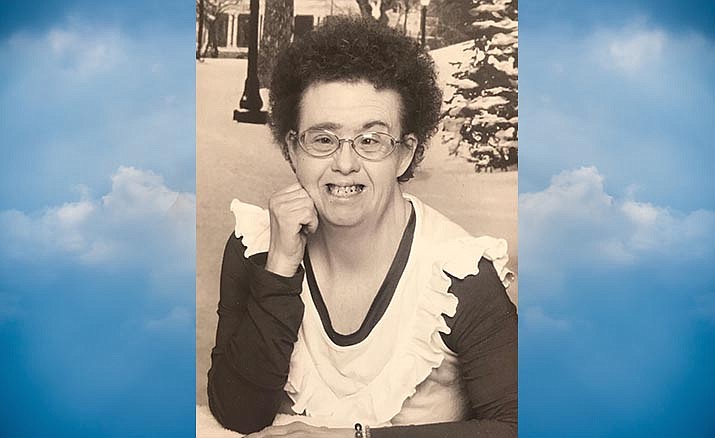 Shelly Dean Tadlock was born on March 11, 1962 in Glendale, Ariz. She spent most of her life growing up in San Bernardino, Calif., participating in Special Olympics, and filling her home and family with loving laughter. She was a bridge that joined two families.

Her later years were spent as a resident of Cottonwood, Ariz. where she resided with her aunt and uncle, Kay and Barbara Connolly, and their children after the passing of her mother, Crystal Lindblad, in 2001.

She instantly became “family” to the Connollys and to each of their kids and grandkids. Shelly’s final home was with “YES the ARC” here in Cottonwood, where she flourished in their tender care.

Shelly will be remembered for her love of music and dancing, for her silly terms of endearment, known as “Shelly-isms,” to those whom were blessed enough to be called her family and friends.

Her joy and sparkle will live on in our hearts. Shelly is survived by one brother, Samuel Tadlock Jr.; and two sisters, Jacque Kidwell, and Shami Khan.

She is also survived by her cousin, best friend and legal guardian, Carrie Reay.

In lieu of flowers, please, consider making a donation in Shelly’s memory to “Yes the Arc” program for adults with developmental disabilities, or give flowers to bridge a broken family, friendship, or heart…that’s what Shelly would have liked.

Condolences may be conveyed at www.buelerfuneralhome.com.