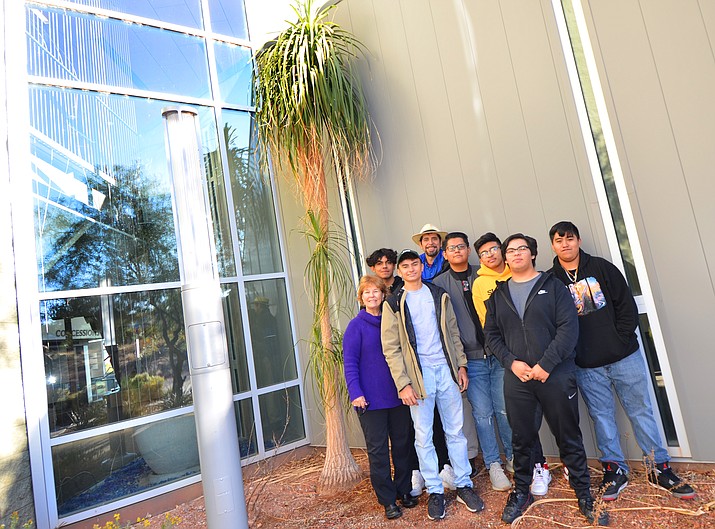 SEDONA — Former Sedona Red Rock High school librarian Elaine Vail couldn’t hold back her giggles as she watched all the fuss being made over a 20-foot-tall palm plant outside of the high school on Wednesday.

Vail watched as the ponytail palm was uprooted by the landscaping crew and carried into the school’s auditorium like a long canoe.

The desert palm would probably die if left outside Red Rock High School through the winter, and temperatures have already begun to drop below freezing.

So the school’s students, administration and parents, with the help from a crew of Joe Villegas Landscape Gardening, dug up the tree Wednesday and carried to a toasty corner of the school’s auditorium to be potted.

The plant was rescued from the school’s library by a half dozen Red Rock High School students last April after it grew so big that it busted through its pot, Vail said.

The students used dollies to bring the plant outside and replant it in the courtyard last spring, she continued. They carried buckets of water down to the tree to keep it alive, she said.

It’s amazing it survived, Vail said. Local skeptics said it would be impossible to replant the tree, as they thought the school couldn’t raise the money.

“It was just a little dream of mine,” she said.

Vail said the four-foot palm plant was a donation for a school prom from a local nursery 20 years ago. She said it ended up in the library where she and retired school IT tech Rosetta Mobley nursed it and took care of it.

The plant grew out of its pot twice before, but this time it was a bigger problem because of its size. “It was about to bust out of the skylight in the library,” she said.

No one was willing to assist. Then she called us,” Villegas said referring to Vail.

Villegas was told there was a group of students at the school that didn’t want to see the tree die. “It was imminent it was going to die,” he said when he saw the broken pot.

“They hustled it outside and planted it in the ground, stabilized it, so it lived,” he said. “No one was willing to assist. Then she called us,” Villegas said.

Villegas had a crew of four on the job Wednesday, obtained the pot from Green Goddess Nursery in Phoenix and brought a mini-skid steer to move the 1,000-pound concrete pot into the auditorium. The tree also got mulch and fresh soil.

The plant species is in critical condition due to “severe fragmentation and destruction of their habitats,” explains Wikipedia. “This exploitation process exposes this species, in a state of threat or extinction, by reducing the minimum viable size of the populations, as well as the deterioration of their genetic diversity,” Wikipedia explains under state of conversation for the plant.

Vail said she was not surprised by the reaction by the students to save the Sedona tree last April and through the summer.

“They are incredible kids. So giving,” Vail said. “They don’t want to see it die.”

Villegas said he got involved because he was impressed by the students’ involvement and wanted them to know that it was because of their efforts, other people embraced the project.

“It’s a nice little Holiday story; it’s one of those heart-warming stories,” Villegas said, “It’s kind of a give-back to the community.”