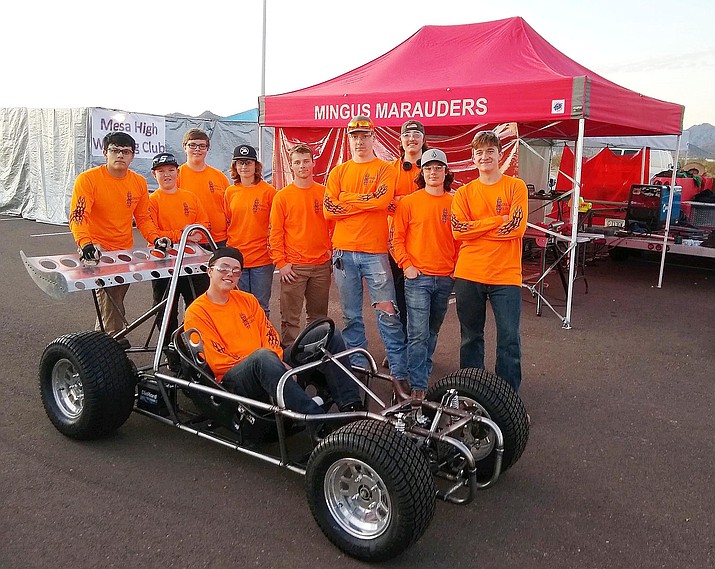 COTTONWOOD -- The welding club at Mingus Union High School has plenty to be thankful for.

A function of Welders Without Borders, Welding Thunder was an opportunity for the participating teams to build “old school dirt track racers, just for the fun of it,” according to the Facebook page for American Welding Society Arizona Section.

Although teams can have as many or as few team members as they would like, only five people can work on the go-kart at any one time.

But team members can tag in or out at any time during the competition. Each team started with the same basic frame kit, with the option of modifying as they choose to.

Teams were allowed to design and practice before Welding Thunder, but all the work must be done at the event location.

According to Mingus Union welding instructor Andrew Lamer, the welding club “worked very hard during the event and during the month of November preparing for the event.”

“All of their hard work and preparation paid off,” Lamer said. “Their go-kart made the third fastest lap time for the event and won the people’s choice award for the competition. This year, our build was easily one of the most complex and intricate projects we have done for a competition and I am super proud of how they worked as a team during the event.”

Bob Weir, Valley Academy superintendent, said Tuesday that he is pleased that the Mingus Union welding club was successful at Welding Thunder.

“They have an outstanding welding shop at Mingus, one of the best in the state,” Weir said. “The competition was a good opportunity for them. Andrew Lamer is doing a really good job there. Their kids are doing a great job.”

According to Lamer, this year’s Welding Thunder competition was the second for juniors Sergio Vasquez, Zach Figy, and Chris Masten, and for senior Jackson Shilling. For the rest of the students – freshmen Tuff Morgan, David Donovan, Desirae Barnes, Hunter Robinson, senior Aiden Skoch and sophomore Wesley Swank – this year’s Welding Thunder was their first competition.

Welders Without Borders was founded in 2000 and is dedicated to the advancement of welding knowledge with no borders on earth or in space.