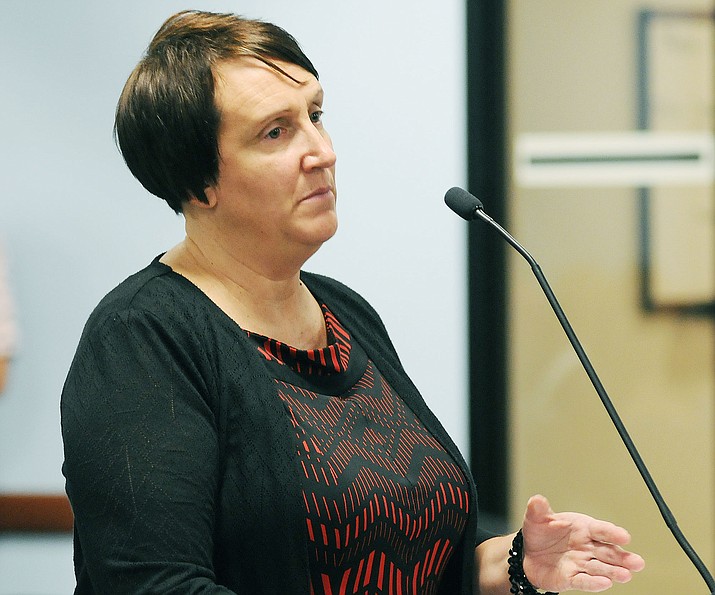 Diane Brown, executive director of the Arizona Public Research Group tells utility regulators Monday that a blanket moratorium preventing power disconnects in hot weather is not in the best interests of all customers. (Capitol Media Services photo by Howard Fischer)

PHOENIX -- State utility regulators are trying to determine how hot is too hot -- and least when it comes when blocking electric companies from shutting off the power to customers.

A draft plan reviewed by the Arizona Corporation Commission on Monday would keep utilities from pulling the plug only if the forecast predicted that temperatures in the next five days would rise about 105 degrees.

What's notable is that the original proposal set the bar at just 95 degrees.

But Elijah Abinah, the commission's utilities director, cited documents from Tucson Electric Power and its sister company, UNS Energy, which showed that using the lower number effectively would preclude disconnects from April into October. And Abinah also said that the 105-degree threshold is what is used in Nevada, the only other state in the area which has such a hard-and-fast rule.

That change drew derision from John Coffman, an attorney speaking on behalf of AARP. He said a broader look across the nation finds that the majority of states that preclude shutoffs based on heat use 95 degrees as the test.

"I understand Arizona is a very hot state,'' he said.

"And that might mean more days (where shutoffs are prohibited) than in other states,'' Coffman continued. "But that doesn't negate the physiological danger to public health.''

Coffman said there's also the fact that the people most likely to be in danger are seniors who may be particularly vulnerable to heat.

Commissioner Boyd Dunn said using 95 might be unrealistic in Arizona.

He said 105 might be considered excessive heat in June, when the thermometer rises quickly.

Using 95 as the point to bar shutoffs drew concern from Diane Brown, executive director of the Arizona Public Interest Research Group. She feared that would result in putting five months of the year off limits to disconnections -- a period that "could grow longer with some of the changes that we're seeing in our climate.''

And Brown said that barring utilities from shutting off power to some customers for that long a period of time might not be in the best long-term interest of all utility customers.

"I don't know of any other business that just allows customers to not pay for that period of time,'' she said.

The problem, said Brown, is that utilities are going to have to make up the temporarily lost revenues somewhere else.

She pointed to the fact that the commission imposed a temporary emergency moratorium on disconnections earlier this year in the wake of the death of a Sun City West woman whose died of heat-related injuries after Arizona Public Service cut her power when the outside temperature was 107 degrees. The woman, Stephanie Pullman, had paid only $125 of her $176 bill.

Since that moratorium was put in place, Brown said, APS is now owed $30 million. She said that if people believe they don't have to pay their bills for five months of the year then more people will take advantage of that window, leaving it to the remaining customers to make up the difference.

That goes to another question for commissioners: If customers can avoid paying bills during hot months, how much time should they have to repay.

The current emergency rule says customers must arrange to repay any unpaid balance over four months after the moratorium on cutting them off ends.

"That really is setting someone up for failure,'' Coffman said.

Cynthia Zwick, executive director of Wildfire, an anti-poverty organization, agreed that four months is too little time to get to pay off the balance of what is owed over the summer. But she's not sure that a full year is appropriate, suggesting that the customer service representatives at individual utilities be given more leeway in providing additional time.

That leads to another big question: Who should be entitled to get a bill deferral.

The proposal in front of the commission uses the test of a person's inability to pay. But it includes things like requirements to prove lack of gainful employment or qualifies for welfare assistance as verified by the Department of Economic Security or other agencies, or has an annual income below the federal poverty level verified by the IRS or state Department of Revenue.

"The utilities shouldn't have information about whether a customer is employed or not,'' said Jorge Fuentes, director of the Residential Utility Consumer Office. More to the point, he said it doesn't matter the reason a customer says he or she can't pay the bill.

Zwick called that proposal for verification "unrealistic,'' saying that DES does not know everyone who is unemployed or underemployed. She said a customer's word should be sufficient.

That drew a skeptical response from commission Chairman Bob Burns.

"People can tell you they're unable to pay,'' he said, asking how a utility should be able to verify. Zwick dismissed that as unnecessary

"I don't think most people would tell you they're unable to pay their bill when they're not,'' she said.

"Well, when we put the moratorium in place, apparently a lot of people stopped paying their bill,'' Burns responded.

Zwick conceded the point but said that most of those people are using the breathing room of not having to pay the power bill to pay off other bills.

Brown also questioned whether regulators were worrying too much about setting up rules for when customers can avoid paying their bills and not enough about keeping them from having the plug pulled in the first place. She said there should be more emphasis on telling people how and where they can get financial help.

There was a testy exchange between Fuentes and Commissioner Sandra Kennedy who suggested that some APS customers would not be having trouble paying their bills had the regulators not approved a rate hike in 2017.

Kennedy, who was not on the panel at that time, said RUCO did not oppose the final plan to let the company collect another $95 million a year from ratepayers. She told Fuentes his agency should have said something against that at the time.

Commissioners hope to have final disconnection rules ready for consideration by their November meeting.