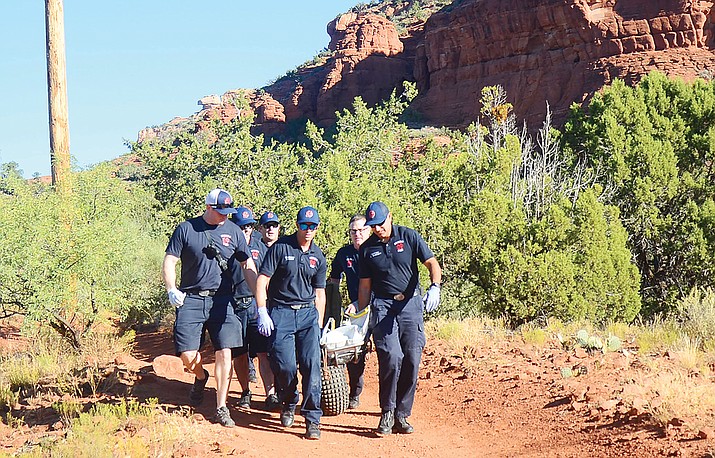 A local hiker found an unconscious mountain biker on the Chimney Rock Trail on Tuesday morning, called 911, and performed CPR until Sedona Fire and others arrived to carry him down the trail. VVN / Vyto Starinskas

A local hiker found an unconscious mountain biker on the Chimney Rock Trail on Tuesday morning, called 911, and performed CPR until Sedona Fire and others arrived to carry him down the trail.

Sedona Fire District Battalion Chief Buzz Lechowski said he could not comment on the condition of the mountain biker who was taken to the Sedona Medical Center emergency room by ambulance.

The good Samaritan was a local hiker who helped administer CPR , but did not want to be identified by name in media. The hiker was still talking with police and fire rescue personnel in the parking lot after the ambulance left.

Lechowski said Sedona Fire got called out to a full “Code – Echo Assignment,” which is someone down and unconscious.

Firefighters hiked up to the scene where a local hiker had initiated CPR and called 911, he continued. Se-dona Fire took over CPR, he said, and the paramedics started advanced life-support.

The mountain biker was carried down the trail by a group of Sedona firefighters and police officers to a waiting ambulance.

The middle-aged man — as described by Lechowski — was found while mountain biking on the Chim-ney Rock Trail, which is off the Thunder Mountain Trail Head where an ambulance and police were wait-ing.

“Early 911 activation and early CPR are the keys,” the fire battalion chief said. The hiker “did both.”

Two engines from two stations arrived at the scene because it takes a crew to carry down a person for the trail, he said.