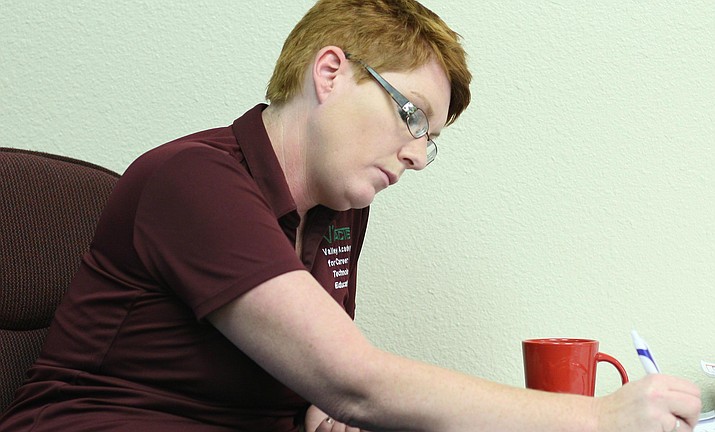 COTTONWOOD – The former Valley Academy of Career and Technology Education business has been indicted for 19 felony counts of theft and misuse of public monies.

“You wish you didn’t have those issues to deal with,” Valley Academy Superintendent Bob Weir said. “This is partial closure on past problems.”

Weir said that to his understanding, the Auditor General’s Office “will go after her for the money.” But he’s not expecting Valley Academy to receive the stolen money.

“What I got from them, there’s no guarantee,” Weir said.

Auditor General Lindsey Perry wrote in a Sept. 30 letter to Gov. Ducey, Arizona Attorney General Mark Brnovich and the Valley Academy Governing Board that the investigation “consisted primarily of inquiries, observations, examination of selected financial records and other documentation, and selected tests of internal control over VACTE’s operations.”

Perry also wrote that the investigation was “not conducted in accordance with U.S. generally accepted auditing standards and was more limited than would be necessary to ensure we discovered all misused public monies or to give an opinion on internal controls.”

“Accordingly, we do not express an opinion on the effectiveness of internal controls or ensure that all deficiencies are disclosed,” Perry wrote.

‘It was a surprise’

Ziemkowski resigned in May 2016 after a VACTE employee questioned her about certain credit card purchases. Valley Academy – VACTE – reported fraud allegations to the Auditor General’s Office, according to a news release.

Weir said that Valley Academy was involved in the Auditor General’s Office’s investigation. However, “a lot of it happened before I got here,” he said.

Weir became Valley Academy’s superintendent in July 2016 after 24 years at Camp Verde High School, where he was the school’s career and technology education director.

“I didn’t deal with [Ziemkowski] much,” Weir said of his time at Camp Verde High School. “To me, it was a surprise when I came here and found it out.”

The Arizona Auditor General’s full report can be seen at azauditor.gov/sites/default/files/19-407_Report.pdf.

‘May have’ embezzled monies, falsified documents

The Auditor General’s investigation revealed that from June 2015 through March 2016, Ziemkowski “may have embezzled VACTE monies when she issued five unauthorized warrants totaling $19,851 for her personal purposes and used a VACTE credit card to make personal purchases totaling $10,746.”

Ziemkowski, the report continued, “may have also falsified VACTE documents and information in VACTE’s accounting software and Governing Board packets to conceal her actions.”

“We have submitted our report to the Arizona Attorney General’s Office, which on June 24 presented evidence to the State Grand Jury,”

Shawnna Patton, who worked for five years with Ziemkowski, is now the program’s business manager. Although Patton spoke with the Auditor General’s Office as part of the investigation, she said that “due to the continued indictment process, I can’t comment.”

VACTE is a tuition-free public career and technical high school district in Cottonwood that provides training in areas such as fire service, nursing assistant, and welding to high school students and homeschooled students.

VACTE is one of 14 Career and Technical Education Districts (CTEDs) in Arizona.