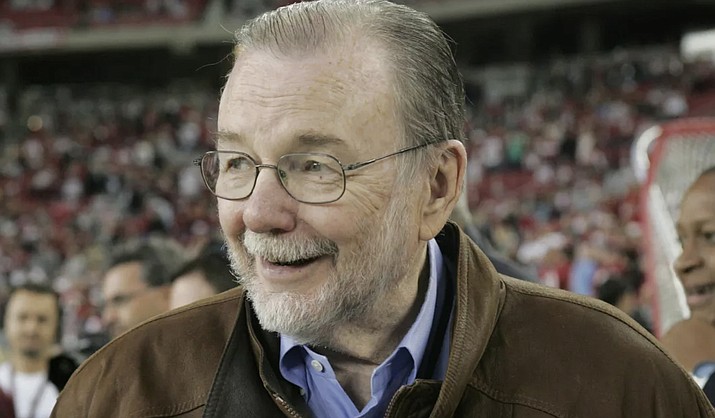 Arizona Cardinals owner Bill Bidwill was not as visible as many high ranking NFL officials, but he had a strong passion for his football team, friends said. (Photo courtesy Arizona Cardinals)

TEMPE – In many ways, Bill Bidwill was not a typical NFL team owner. He wasn’t a high-strung businessman, or the son of an oil tycoon. In an era where corporate sponsorships, multi-billion dollar endorsement deals and political tensions define the NFL, football for Bidwill was, at its core, a family business. And Bidwill was a family man.

He may have been an enigma to Cardinals fans and others who knew him only through his public persona. But in their tributes to him Wednesday in the wake of his death at age 88, Bidwill’s close friends and associates describe a humble, joke-telling man with a deeply caring nature.

Cardinals fans may have misinterpreted Bidwill’s reserve and distaste for the spotlight as his being aloof, said George McCaskey, Chairman of the Chicago Bears and a lifelong friend of the Bidwill family.

In many ways, he got a bad rap with the fans,” McCaskey said. “But he truly cared about the fans as well.”

Former and current players on the Cardinals said Bidwill, though not considered particularly outgoing or charming, placed immense importance on his personal relationships and valued opportunities to get to know the men who played for him.

“During Friday lunches after practice, he would be the first in line, ready to eat,” said retired NFL quarterback Jake Plummer. “Mr. B really loved to engage and talk to players. If you sat down with him at lunch, he’d love it.”

Plummer added that a lot of players “were scared of him but I would go and sit with him. Same with Pat Tillman. Pat would love to talk with him. I think a lot of guys thought, ‘He’s the owner, he’s off limits.’ But he really loved to engage and talk to his players.”

Drafted by the Cardinals in 1997, Plummer spent six seasons with the team before signing with the Broncos.

“I always saw him as a guy with a sense of humor that a lot of people maybe didn’t get a chance to see,” said Bertrand Berry, a Cardinals defensive end from 2004 to 2009. “I’ll always appreciate him for making me feel like a person and not just a player.”

As two of the most important sports figures in Arizona for many years, the paths of Bidwill and Jerry Colangelo crossed often. Colangelo, the former owner of the Phoenix Suns and Arizona Diamondbacks, said he welcomed the news that the Cardinals would be relocating to Arizona from St. Louis in 1988.

“Bill was a very low key individual and a very generous person,” Colangelo said Wednesday from his home in Carmel, California. “He didn’t flaunt it. He did a lot of things quietly. That was his personality.”

He contributed to many causes around the Valley and had a long-standing relationship with St. Peter Indian Mission School in Bapchule

Larry Fitzgerald, the Cardinals’ wide receiver, also spoke of Bidwill’s humility and pointed out that Bidwill prioritized diversity in his organization in the 1990s, before doing so was common.

“It’s something that’s preached around Fortune 500 companies and sports organizations now,” Fitzgerald said. “Back then, (valuing diversity and hiring people from different backgrounds) wasn’t the norm.”

Fitzgerald didn’t hold back when describing his feelings about Bidwill and said he feels lucky his path crossed with Bidwill’s.

“There’s no telling what my career would have been without his blessing,” Fitzgerald said.

Alex Simon and Dylan Carter contributed to this report.