Trump sees treason in whistleblower; to ASU prof, it’s not so clear-cut 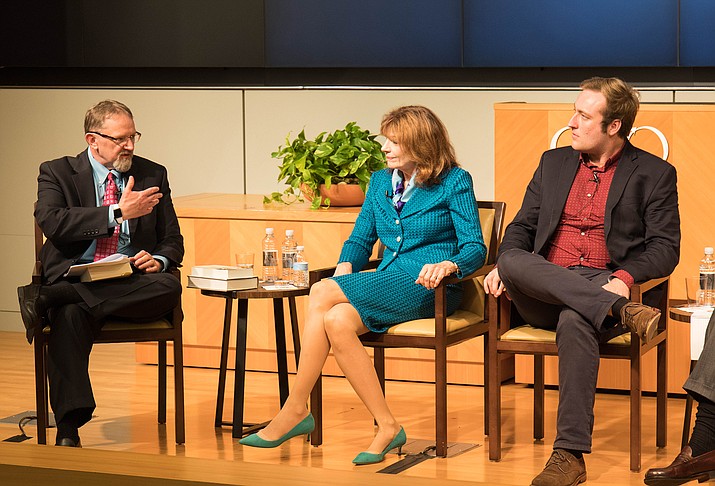 The Cato Institute’s Patrick Eddington asks ASU Professor Marianne Jennings about corporate whistleblowers as Irvin McCullough looks on. Jennings said of the White House whistleblower, “If you’re going to bring down the president, let’s make sure you have evidence.” (Photo by Lindsay Walker/Cronkite News)

WASHINGTON – To President Donald Trump, the White House whistleblower who reported concerns about his call with the Ukrainian president is comparable to a spy and a traitor.

To Marianne Jennings, whistleblowers aren’t sinners – but they aren’t always saints, either.

Jennings, an Arizona State University professor of business ethics and an expert in corporate whistleblowers, was part of a panel Wednesday looking at modern whistleblowers. Everyone at the Cato Institute panel agreed there is a vital role for whistleblowers, who Jennings said can range from people risking their lives or livelihoods to right a wrong to “cranks” who erode the credibility of “sincere” whistleblowers.

“I think these folks see things and they’re sort of like cowboys that ride into a town and they’re shooting off their guns into the air and they’re pretty harmless, but once in a while they hit something,” she said.

Jennings, who called herself the “only token Trump supporter” on the panel, thinks there is clearly politics at play in the charges against Trump, which helped push House Speaker Nancy Pelosi into opening an impeachment inquiry of the president.

But others on the panel said the White House whistleblower complaint appears credible, and that everything in the handling of it so far has been done by the book.

“Any inspector would look at this disclosure and see that it warrants further review,” said Irvin McCullough of the allegations leveled at the president over his July 25 call with Ukrainian President Volodymyr Zelensky. McCullough is a national security analyst at the Government Accountability Project.

But Trump said Wednesday that if anything needs review, it’s the identity and motives of the whistleblower.

At a joint White House news conference with Finnish President Sauli Niinisto, most of the questions were about the whistleblower’s complaint, and an agitated Trump responded by calling Democrats liars, traitors and dishonest.

“This country has to find out who that person was, because that person is a spy, in my opinion,” said Trump, a day after accusing Democrats in a tweet of trying to mount a coup.

He called the impeachment inquiry “the greatest hoax” perpetrated by the “Do Nothing Democrats,” led by Pelosi and Rep. Adam Schiff, D-Calif., the chairman of the House Intelligence Committee.

The complaint centers on Trump’s July 25 phone call, in which he urges Zelensky to “do us a favor” by investigating former Vice President Joe Biden, a potential Trump rival in the 2020 elections, and his son, Hunter Biden. He encouraged Zelensky to work with his personal lawyer, Rudy Giuliani, and with Attorney General William Barr on the matter.

Giuliani was subpoenaed Monday by the Intelligence, Foreign Affairs and Oversight and Reform committees, the three House panels pressing the impeachment inquiry. They have also subpoenaed Secretary of State Mike Pompeo and are scheduled to hear Thursday from Kurt Volker, who resigned as the U.S. special envoy for Ukraine last week after his name surfaced in the whistleblower’s report. It said Volker acted as an intermediary between Giuliani and Ukrainian officials, whom he advised on how to “‘navigate’ the demands that the President had made of Mr. Zelensky.'”

Jennings’ echoed the president and his defenders, who note that much of the whistleblower report relied on second-hand information. She said that 99.9% of corporate whistleblowers come prepared with documentation and evidence, but that the whistleblower in Trump’s case was not on the call in question.

Jennings said she would like to see an independent review of the allegations, since impeachment “will effectively reverse the vote of 2016. It needs the process.”

But McCullough said that nothing in the law requires whistleblowers to have witnessed misconduct firsthand. And he noted that the whistleblower report was just the start, pointing to a 14-day review conducted by the inspector general of the intelligence committee that turned up more witnesses.

“Every witness interviewed is also a whistleblower, because they cooperated with the inspector general investigator,” said McCullough, saying that is driving “group mentality.

McCullough divulged that his father is a member of the whistleblower’s legal team, but said they maintain a professional “firewall” and have not talked about the case. But he said he was not surprised by Trump’s reaction to the allegations.

“One of the main reactions to being told you are doing something wrong is to do something barbaric,” McCullough said. “So far what we’ve seen is the president trying to find the identities of the people working with the whistleblower.”

Tom Mueller, the third panelist at the Cato event, said the focus should turn from the whistleblower to that person’s report.

“It’s important to try not to reduce whistleblowers to hero or demon,” said Mueller, author of “Crisis of Conscience: Whistleblowing in an Age of Fraud.” “Do they have good facts or not, that’s the most important thing.”