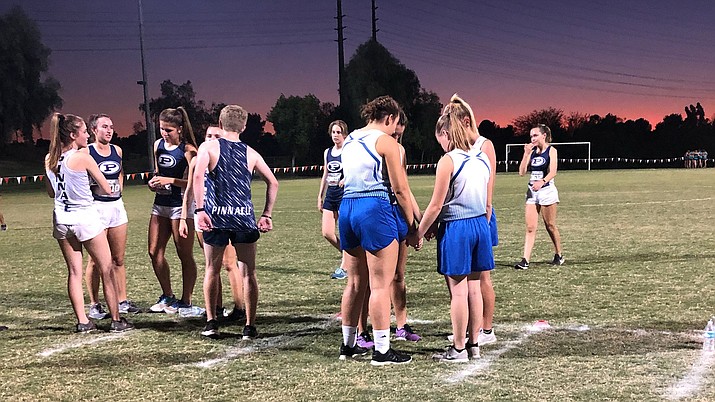 Camp Verde cross country runners huddle before the girls race at the Phoenix Classic - Showdown at Sundown at Crossroads Park in Gilbert on Friday night. Photo courtesy of David Castillo

The Cowboys ran at the Phoenix Classic – Showdown at Sundown at Crossroads Park in Gilbert.

The Cowboys’ next meet is the ALA Invitational on Wednesday at Cesar Chavez Park in Laveen.

Camp Verde High boys soccer rebounded on Thursday after their five game win streak was snapped earlier in the week.

On Tuesday CV lost 7-1 at No. 1 Blue Ridge, which ended the Cowboys’ win streak that dated back to Sept. 6.

The Cowboys travel to No. 19 Payson on Thursday in their next game. Camp Verde’s next home match is Oct. 15 against No. 2 Chino Valley at 6 p.m.

After starting the season 0-3-1, the Cowboys have won two of their last three.

Camp Verde’s next game is Tuesday at 4 p.m. when No. 9 Payson comes to town.

The No. 32 Cowboys beat the Spartans 3-2 after falling 3-0 at No. 9 Scottsdale Prep earlier in the week.

The Cowboys’ next match is Monday at No. 5 Sedona Red Rock. Their next home match is Oct. 17 against No. 16 Valley Lutheran.