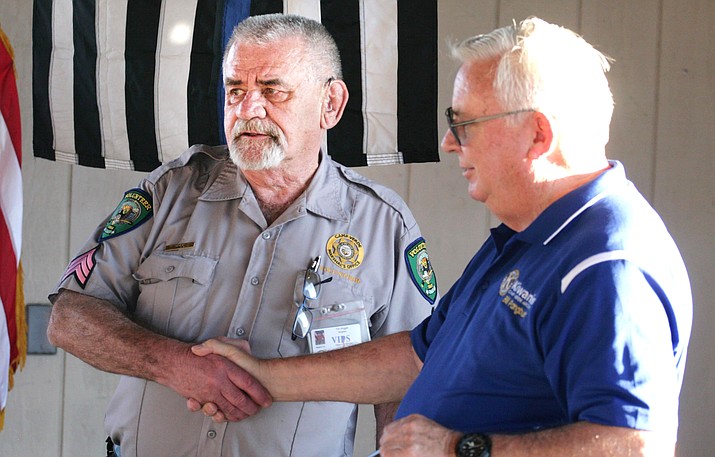 CAMP VERDE – As with most volunteer organizations and groups, the Camp Verde Marshal’s Office’s Volunteers in Policing program is looking for people who are interested in serving their community.

One of those volunteer officers, VIP Sgt. Tim Wiggle, has won the Marshal’s Office’s annual Law Enforcement Service award, as selected by the Camp Verde Kiwanis.

Wiggle, who first volunteered with the program in 2016, has what Camp Verde Marshal Corey Rowley recently called a “passion for service.”

“I can’t say enough about Tim’s dedication to the VIP program,” Rowley said. “Tim is truly the meaning of a service-oriented person. He is in the office every day even before our office staff arrives. He is constantly reviewing the daily needs we have, where his staff can help us out.”

The Marshal’s volunteers – VIPs – go through extensive training so they can help with special details such as event foot patrol for Fort Verde Days and National Night Out, as well as DUI saturations, Task Force, radar trailer deployment, missing persons response, and a variety of office work such as evidence/filing and documenting evidence.

Rowley promoted Wiggle to VIP Sgt. earlier this year “because he truly knows how to lead people.”

“He is at 99% of the events we have, and his team has 110% involvement in those events,” Rowley said. “He has orchestrated service hours with his volunteers that have saved taxpayers literally tens of thousands of dollars. He and his team have saved our budget from strains that are too numerous to list.”

Not only do the volunteers save money, but they allow deputies to protect and serve Camp Verde, Wiggle said.

Wiggle was the only volunteer among the four finalists for this year’s award. The other finalists were Commander Brian Armstrong, Lt. Daniel Jacobs and Det. Dustin Richardson.

Wiggle said he is “still somewhat surprised” to have won the award.

“To be the recipient, considering the caliber of the three other nominees, is more than I can put into words,” Wiggle said. “I do what I do not for the awards, but because I enjoying giving back to the community and also because of the people who I work with in the Marshal’s Office.”

Rowley also said that “any organization would be better if they each had a Tim Wiggle at their side.”

“He is well deserving of this award and is the first volunteer to ever receive it,” Rowley said. “I am proud to have Tim in our organization but ever prouder to call him friend, as are many people at CVMO.”

For more information about volunteering with the Camp Verde Marshal’s Office, contact Tim Wiggle at 810-531-0684 or tim.wiggle@campverde.az.gov.