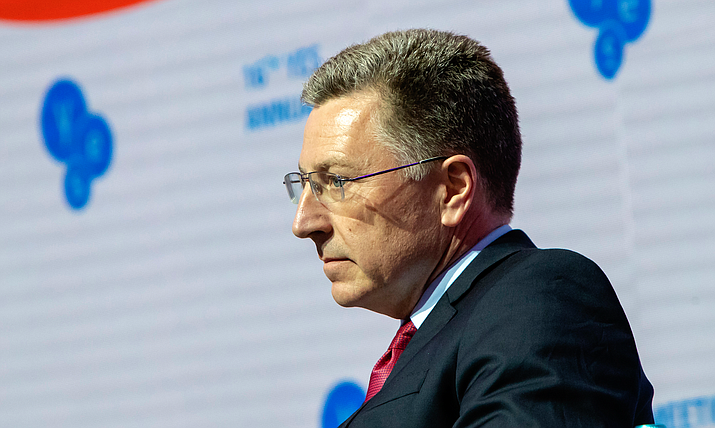 Former McCain Institute Executive Director Kurt Volker at a September event in Ukraine, where he was U.S. special envoy. He resigned as special envoy and from McCain after his name surfaced in a whistleblower report raising concerns about the White House’s dealings with that country. (Photo courtesy U.S. Embassy, Ukraine)

WASHINGTON – Three days after he told staff at the McCain Institute that he was still their executive director, Kurt Volker resigned Monday because his role in a House impeachment inquiry “risks becoming a distraction” to the institute’s work.

Cindy McCain, a trustee of the institute founded by her late husband, also thanked Volker for his service in a statement and said former Bush administration official Fran Townsend will represent the board as the institute looks for a permanent replacement for Volker.

Crow said in a statement that Volker will remain on paid administrative leave from his university duties “until further notice.”

Volker resigned last month as U.S. special envoy for Ukraine after his name surfaced in a whistleblower’s report about President Donald Trump’s call to the new Ukrainian president. In that July 25 call, Trump urged the Ukrainians to investigate former Vice President Joe Biden – a potential challenger in 2020.

Volker spent 10 hours Thursday in closed-door hearings with the three House committees that are investigating that report as part of an impeachment inquiry of Trump, then met Friday for a clear-the-air meeting with institute staff. Officials said at the time that he would stay on as director, even as they said trustees would meet to consider what is best for the institute.

His continued tenure was short-lived: By mid-morning Monday in Washington, the institute issued a statement announcing “a leadership transition.”

In that statement, Volker said the “recent media focus on my work as U.S. Special Representative for Ukraine Negotiations risks becoming a distraction from the accomplishments and continued growth of the Institute.”

Retired Army Gen. David Petraeus, the former director of the CIA and a McCain trustee, said Monday that he thinks highly of Volker, “having worked with him while I was in uniform when he was a senior foreign service officer and the U.S. Ambassador to NATO.” He continued to hold Volker in high esteem both for his work as director of the institute and as the special envoy to Ukraine, Petraeus said in an emailed statement.In his opening statement to the committee Thursday, Volker stressed his “efforts were entirely focused on advancing U.S. foreign policy goals with respect to Ukraine.” He noted the importance of Ukraine as a check on Russian aggression and insisted that “at no time was I aware of or took part in an effort to urge Ukraine to investigate former Vice President Biden,” pointing to the text messages he offered to the committee as evidence.

But in one of those texts, released by Democratic chairs of the three House committees looking into impeachment, Volker writes “assuming President Z (Ukrainian President Volodymyr Zelensky) convinces Trump he will ‘investigate/get to the bottom of what happened’ in 2016, we will nail down date for visit to Washington.”

Other texts show Bill Taylor, the charge d’affaires in the U.S. embassy in Ukraine, pushing back against the efforts by administration officials to elicit a promise from Zelensky of an investigation. In one exchange, Taylor mentions to U.S. Ambassador to the European Union Gordon Sondland that Ukraine does not want to be seen as “an instrument in Washington domestic re-election politics.”

Democrats have zeroed in on an exchange between Sondland and Taylor where the latter expresses concern the president is withholding military aid in exchange for an investigation of the Bidens.

In his reply Sondland suggests “we stop the back and forth by text,” instead switching to phone conversation to discuss it further. He is due to testify before the committees Tuesday morning.