Rep. Gosar: ‘This president has not done anything wrong’ 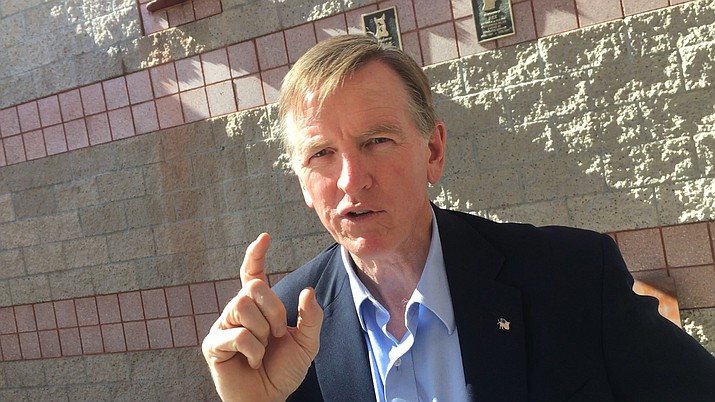 In Cottonwood this week, U.S. District 4 Rep. Paul Gosar, said, “I am not voting for impeachment. Time and time they have investigated this, with nothing there.” VVN/Vyto Starinskas

COTTONWOOD -- U.S. District 4 Rep. Paul Gosar, made it clear this week he will not vote for the impeachment of President Donald Trump.

“This president has not done anything wrong,” said Gosar while at the Cottonwood Police Department Tuesday.

“I am not voting for impeachment,” the Republican congressman told the Verde Independent while in Cottonwood on a two-week congressional break. “Time and time they have investigated this, with nothing there.”

The Arizona congressman is united with other Republicans in the House who said they do not support an impeachment inquiry of the president at this time.

When asked about Trump speaking to foreign leaders about Vice President Biden, Gosar said, “I don’t really know if anyone who’s done a crime, or suggested of crime, gets a pass because you’re a politician or a vice president.

“It didn’t happen to Spiro Agnew and it shouldn’t happen to somebody else,” Gosar said. “If Joe Biden is innocent, he should get that equilibrium of innocence.”

“But the facts don’t look good for Joe,” Gosar continued.

Gosar was in Cottonwood recognizing Cottonwood Police Department victim’s advocate Johannah Rutschow with recognition for her successful work in the community.

Gosar said the disagreements in Congress have taken the focus off issues such as victim advocacy, gun control, immigration and infrastructure.

“I don’t have the mic: It’s Nancy Pelosi, oh I forgot AOC maybe has the mic. They’re are the ones dictating this,” said Gosar.

Gosar said it’s been nice being back in his district for a week and seeing “people with smiles and blue sky.”

“There’s not a lot of people not getting along back in Washington, D.C., and it’s going to get crazier as we go forward,” he said,

Gosar said a Foreign Intelligence Surveillance Act report due out Friday will “show the premeditated application of spying on the president.”

Asked if the whistleblower did the right thing, Gosar said they were trying to bring another whistleblower forward, “but what’s he going to add to the conversation? The transcripts have been released. So there’s nothing there.”

“The intelligence service hated Donald Trump even before he was elected,” Gosar pointed out. “That shows you how deep the deep-state is so anti this guy.”

Gosar also criticized the process saying the Democrats should be bringing the impeachment to the floor first, get the articles there and then do the inquiry. “They want to have their cake and eat it too. America’s wise on that,” he said. “They are going to lose big time on this one.”

Gosar was asked if he was concerned about the polls that showed more Americans increasingly in favor of impeachment.

“Polling is flawed,” Gosar said. “It’s how you ask the question.”

Gosar continued that prior polls indicated Trump would lose by six points to Hillary Clinton and he won. He said polls have questions with a mindset from the polling person that can lead to desired outcomes.

“Tune in and watch what’s happening in Washington D.C.” Gosar said. “Your government depends on it.