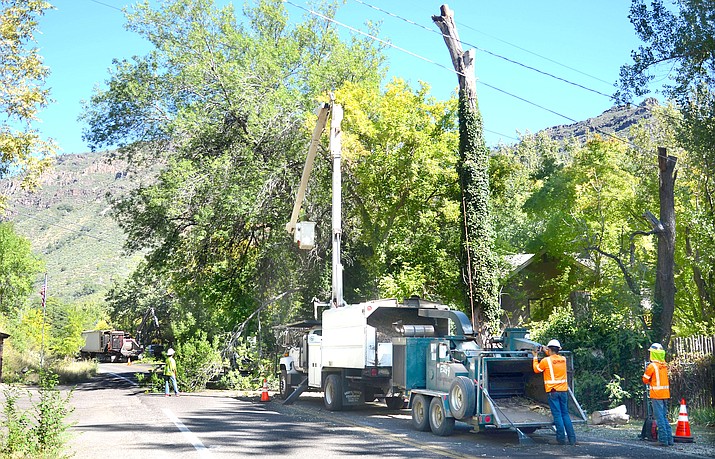 The Arizona Department of Transportation has marked 708 trees for removal along State Route 89A in Oak Creek Canyon, according to Ryan Harding, ADOT spokesman.

Crews have been removing the trees throughout the summer and were in front of the Indian Gardens Café on Monday where traffic was backed up SR89a to allow for the tree removal.

Workers with chainsaws trimmed overhanging branches that strike snowplow trucks when covered with winter snow, and chopped up trees and branches in a large wood mulcher.

The trees are being removed “because of the potential for them to fall onto the roadway and to create a recovery area for vehicles that depart the roadway,” Harding said.

“Removing trees along this 12-mile stretch of highway will help create what is known as a clear zone in the event a vehicle leaves the paved surface. Anything that drivers hit after leaving the roadway can turn a temporary loss of control into a crash that can injure or kill” Harding said.

“Of these trees, 45% are dead or dying and 11% are alive but leaning. Many among the rest have been determined to have exposed root balls, which weaken tree stability and present a possible fall hazard,” he added in the email.

Harding said ADOT is sensitive to the surrounding community and tries to minimize the impact that the tree removals have on the forest.

But making roadways safer means “removing trees along the side of the road,” Harding said.

“Single-vehicle roadway departure crashes accounted for 43% of all crashes along this stretch of SR 89A over the last five years,” Harding said. “Of these, one in eight ended with the vehicle striking a tree.