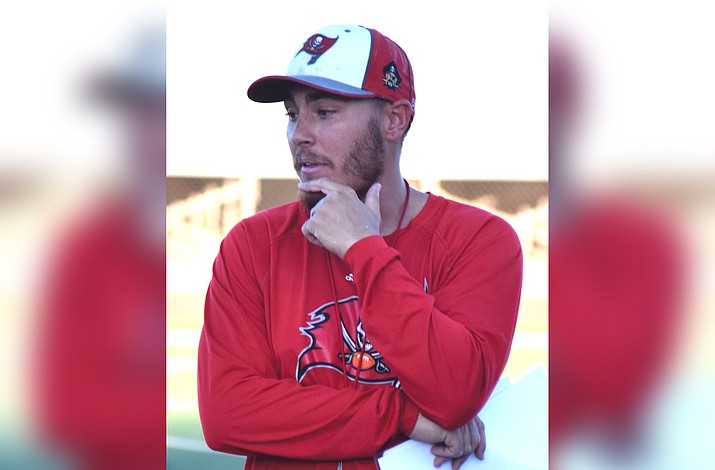 Mingus head football coach Robert Ortiz was ejected from the Marauders’ Oct. 4 game against Mohave after receiving a second unsportsmanlike conduct penalty as the Mingus Union coaches argued an apparent timing error. He has since been suspended as head coach of the Mingus program for the balance of the 2019 season. VVN file photo

COTTONWOOD — They’re not saying much at Mingus Union High School about the fate of second-year head football Coach Robert Ortiz.

One thing is obvious: Ortiz will not be at the helm of the Mingus Union football team for the balance of the 2019 season.

When asked Friday who will be the Mingus head coach for the Marauders’ three remaining games, Superintendent Mike Westcott simply replied, “Erick Quesada.”

As for Ortiz, Westcott said he had “been advised at this time only to state it is an internal personnel matter that is confidential. May be able to elaborate later.”

“I have to refer all our personnel issues to our superintendent,” said DeVore.

“That’s something that you’re going to have to ask the administration, honestly,” Quesada said. “I can’t really speak on that.”

For Quesada, this marks the second time in two years he has been named head coach of a Mingus program in the middle of a season. In 2018, Mingus appointed Quesada to serve as the school’s head baseball coach in the aftermath of a team hazing scandal.

Ortiz was ejected from the Marauders’ Oct. 4 game against Mohave after receiving a second unsportsmanlike conduct penalty as the Mingus Union coaches argued an apparent timing error.

Quesada is the receivers/defensive backs coach this season, as well as the head baseball coach and a science teacher at MUHS. He is a 2011 graduate of Mingus Union.

Ortiz teaches weights and is a 2009 Mingus Union alumnus.

The Marauders are 0-7 this season after going 9-3 in 2018 and reaching the state quarterfinals. Last season in his first year as head coach, Ortiz was Grand Canyon Region Coach of the Year and Arizona Cardinals and Wells Fargo “High School Coach of the Week.”

The Marauders had a bye the weekend of Oct. 11 and MUHS had its annual Fall Break this past week.

“It’s been good, honestly,” Quesada said about the week’s practices. “It’s good for the boys to relax. Really, this was a big maintenance week, getting everything that we need to get over, as far as our bodies, understanding more alignment stuff and just going back to the basics of understanding who we are. This week was a good week to just kind of ‘hit the refresh button,’ and take a step back and just get back to where we need to be mentally and also physically.”

A text message and phone call to Ortiz for comment was unanswered.

Mingus will not renew Ortiz contract as head football coach
Former Mingus football coach Ortiz: ‘There is no other place I would have rather been coach’
Mingus Union football alumni return to Bright Field
Mingus alum Ortiz takes over Marauder football program
Mingus football opens season at Combs
Event Calendar