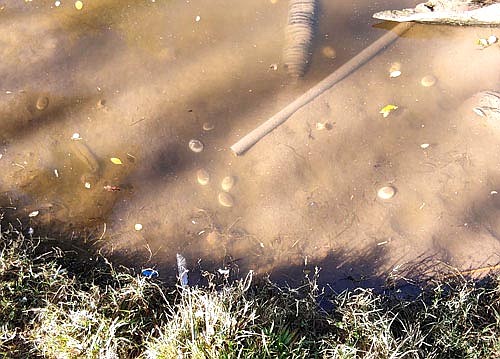 I'm late this week because yesterday was harvest day. (Non-meat eaters should skip the rest of this paragraph.) Ten ducks, all twenty-four of my full-grown and startlingly heavy Red Ranger chickens, plus six more chickens for a friend. I started around dawn. My ranch manager/farm assistant Christina, bless her, joined me later to learn the process.

Christina has helped in a number of slaughters now and is finding it fascinating in a scientific sense. But then, her mother is a scientist and has "sacrificed" many a rabbit.

We were done around 2:30 PM. It was a full day of hard work and the birds are now in refrigerators. They'll rest there for three days, passing through rigor mortis, before I once again pull out the forty gallon pot and shrink-wrap them for the freezer. Why in the fridge for three days? Because, unlike commercial houses I don't use formaldehyde to prevent rigor and I don't like eating tough chicken. The chickens are edible in three days. Just so you know.

Now onto duck eggs. I knew those ducks were laying eggs, but I hadn't seen an egg in months. What I had seen was the ducks coming and going out of the little yellow coop more or less on a daily basis. The puppies would follow shortly thereafter. I figured they were getting to the eggs before me. I tried going out early. No eggs. I saw a duck going under the coop. I looked into the tiny gap between the bottom of the coop and the pond bank. Big enough for a duck to squeeze into, but definitely too small for puppy access. No eggs.

Then, as I mentioned in an earlier post, I started letting the ducks out to the ditch. I thought surely I'd see eggs on the ditch bank, what with the puppies locked into the pasture away from the ducks. And I did. One.

Then weeks later another one.

This is how I decided I needed fewer ducks. Well, that and the fact that as tasty as ducks are, they're unbelievably noisy. I've never had animals with so much to say about everything--even things about which they know nothing, which is basically everything. Something flies overhead and that's a two hour discussion for that flock, with at least

heads to the side of their breasts, then make a weird "yakkity-yakkity-yak" sound as they move their heads up and down. Their hours-long conversations weren't limited to daytime. Unlike chickens and turkeys, these ducks never seem to sleep. Let me say, if they got going with one of their polemics at night, I didn't sleep either.

Deciding to cut down on ducks was one thing, how to do it was another. I knew I'd get the seven that had imprinted on the brooder coop as home.

But what about the older, noisier group? Because they spent their nights in the pond, that meant having to wrangle ducks at dusk when they can't see well, most likely doing most of the chasing in the cold water with the clay pond bottom stealing my boots.

Then, four days ago the seven younger ducks started for home and the older ducks decided to follow. I opened the door wide and stood back.

The two flocks chattered a bit-- yes, doing the neck thing-- then the older ducks turned back for the pond. The next night, they again followed the younger ducks to the brooder coop. This may have had a lot to do with Radha the puppy beginning to practice her bird catch-and-release skills on them. That dog! She has interpreted "no chase" to mean "chasing is okay if you don't kill them." We're working on it.

I watched the two flocks with my fingers crossed, praying for a miracle.

And...in the older ducks went and I closed the door. All I had to do was not open the coop door for thirty-six hours when we reached D-D-Day (duck death day). I felt bad about them having spend their last day locked in, but at the same time, I wasn't going to spit in the eye of such a gift.

Guess what I found in the brooder coop the next morning? Three duck eggs! I gnashed my teeth at how the puppies had cheated me over these months then went on with my day. Later, when I was walking past the pond, I noticed that the water level was very low. Then I noticed that the water was clear for the first time since I let the ducks live on it.

(I also grimaced as I saw the piping and poles that are now permanently embedded in the pond bottom, held in place by a thick layer of muddy clay. I and others have tried to remove them more than once, but they won't budge. But that's another story.)

Then something caught my eye. Something white and oval-shaped. I stopped and stared. There was another white oval shape not far from the first.

And another. And another! There were dozens in there. The ducks had been dropping their eggs while swimming.

I'm not the only one who's noticed this. Radha has recognized what those things are. She's now doing her best to get to the eggs, but she hasn't yet figured out how to put her mouth over them without breathing in water.

Omelets await me in the future! The brooder coop alley is now officially the home of the ducks. That's because when I went to let the ducks out this morning I found two lovely duck eggs waiting for me. The ducks aren't yet convinced they want to be there, but I told them, "Hey, what's not to love about spending your day swimming the ditch and your nights eating all the food you want while safely locked away from predators and puppies?"

I'm sure they'll spend the day discussing this and get back to me when they have an answer.