Paid parking now a fact of life in Jerome 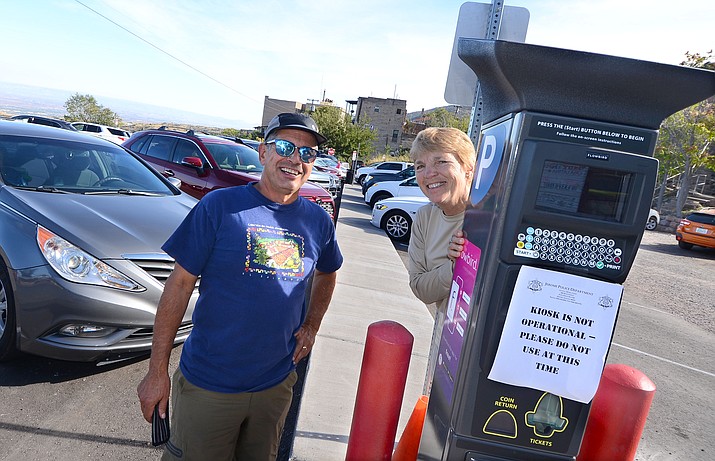 Joan Reidy, and Gary Jenson, members of the Cleveland Hiking Club, pose with one of the new Jerome kiosks Wednesday, the first day the new kiosks were activated in town. However, a “bug” in the software gave them free parking Wednesday afternoon. VVN/Vyto Starinskas

The Town of Jerome began charging to park at 139 of the town’s parking spots Wednesday.

The town began charging for parking at 10 a.m. Wednesday and things went smoothly, said Muma. In the first hour, the kiosks generated $155, the chief added.

“From the tourist point of view,” Muma said. “I’ve had no complaints.”

Later Wednesday, they had to put signs up and temporarily close the kiosks until the chief and the Flowbird representative worked out some minor software problems.

Muma is managing the operation of the kiosks, and the police department is enforcing the fines.

“It’s enforceable now,” Muma said. “But that’s not our goal. Our goal is to get people using them.”

Muma said people will get a warning before they get a ticket.

Muma said the system is up and running but there a “few bugs” they are working out. He thought they would be fixed by the busy weekend.

Motorists will “pay by plate,” meaning each car will get a receipt and put it on their dashboard.

Free parking will continue to be available at the “300 Level” parking lot above the fire station, where free shuttle service is available on Fridays, Saturdays and Sundays.

In addition, there is free parking along parts of Main Street adjacent to shops, restaurants and the Post Office.

The Town of Jerome is seeking income from the tourist traffic to help pay for needed infrastructure improvements.