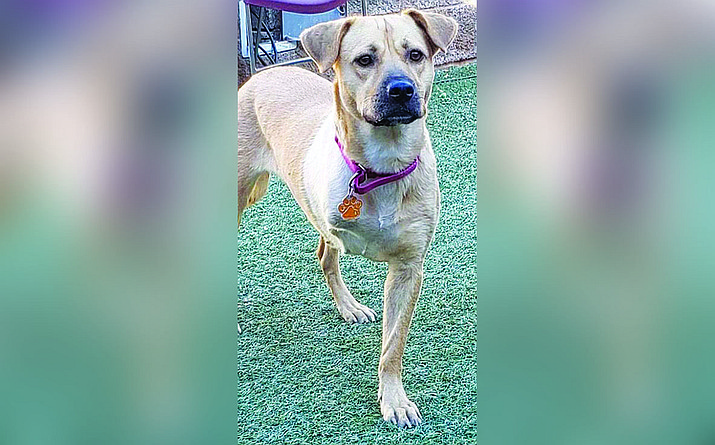 When Beatrice slipped away from its owners last Saturday in Bridgeport, the searchers from Central Arizona Animal Search and Rescue were there within an hour. Courtesy photo 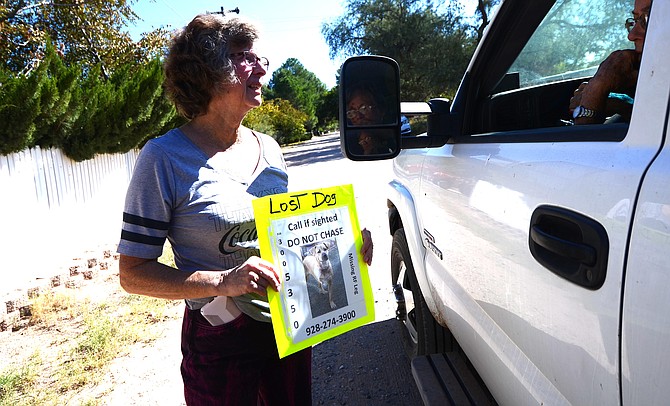 Central Arizona Animal Search and Rescue volunteer Alice Dreyer Rowden shows a poster of Beatrice to a motorist while searching for the three-legged dog in Bridgeport on Tuesday. VVN/Vyto Starinskas

Finding a three-legged dog in the Verde Valley is like finding a needle in a haystack.

So when Beatrice slipped away from its owners last Saturday in Bridgeport, the searchers from Central Arizona Animal Search and Rescue were there within an hour.

The volunteers searched into the dark Saturday for the three-legged dog, which was rescued as a street dog surviving at a Maricopa County construction site.

It was captured after it injured its front leg, which had to be amputated. The 30-pound dog now has a fresh amputation and is shaved at its shoulder.

Sunday, volunteers from Central Arizona Animal Search and Rescue put their response into effect plastering dozens of posters around the area Beatrice was lost. The more posters were put up across the Verde River where people thought they spotted her on Monday.

Traps with dry dog-food with bacon crumbles and blue cheese, a toy and bedding were set in Bridgeport. The location was chosen because most dogs return to the place they ran from.

Then the searchers took to social media, blanketing the various websites with Beatrice’s photos.

But Beatrice, even with three legs, appears to be a strong dog with street-smarts and is scared when approached by people trying to rescue her.

“That three-legged girl is a track star ... She runs fast,” said one person on social media. “Two confirmed sightings right by her new home. Pray,” said another Facebook post.  “Keeping paws crossed “ “Praying for her to come into one of the traps. Come on Beatrice.”

Alice Dreyer Rowden is the Cottonwood point-person for CAASR and she said she has helped reunite hundreds of lost dogs with owners in the two years she has been doing rescue.

Most times the dogs are found near the location they left, and within days. Beatrice is taking a long time to get found, she said.

Dreyer Rowden was at the dog’s traps Tuesday morning with three other volunteers frustrated that there had been no sightings of Beatrice. The dog had not been seen anywhere and they were expanding their search to other parts of the Verde Valley,

But then on Tuesday night, they got their first confirmed sighting of Beatrice after several false reports.

“She ran right past Alice last night” in Bridgeport, explained CAASR Director Mitzie Christian. “So we know she’s still there and she’s OK so far. They got the traps all set for her so we just keep hoping she’ll get hungry and go into one of the traps. You can’t grab her.”

Christian said her organization returned about 180 dogs to their owners last year through CAASR.

She said she started about eight years ago primarily as an animal search and rescue organization, but now it’s a non-profit rescue.

“I fell in love with it when I found my first lost dog,” Christian said. “It’s kind of like having your child out there,” she continued. “We can feel these people’s devastation,”

Christian said she handles the rescue and foster part of the Camp Verde CAASR organization, and has volunteers in Cottonwood, Prescott, Camp Verde and all over Northern Arizona handing the searches for lost dogs.

“We take a lot of dogs no one ever claims,” she said.

Christian said her sister organization, Northern Arizona Animal Search and Rescue, does similar searches for dogs in the Flagstaff and on the reservation areas.

There is no charge to owners of dogs when the dogs are returned to owners, unlike humane societies that charge, she said. CAASR scans microchips and some dog owners do make donations, she added.

Christian said they network on Facebook and they can reach out to thousands of volunteers when they have a search in Northern Arizona through her organizations.

“People are so willing to jump in and help to drive around, or walk around, and search,” she said. The volunteers spend their own money on flyers and gas.

Christian said they have been out trapping for up to six weeks for a dog. Usually they can get a dog within a couple of days - or they have to trap it, she said.

Even though Beatrice was only recently adopted, Christian said many dogs come back to the last place they have escaped from. This is the case with dogs that run from an accident, she added.

There are also people who follow the posts on Facebook and go out and look for the dogs on their own, Christian said, Sedona Humane also has a volunteer out looking for Beatrice, she said.

Christian predicted the dog would eventually go into a trap to get something to eat “and when she does, she’ll get trapped in there, and we’ll have her, and she can go back home.”