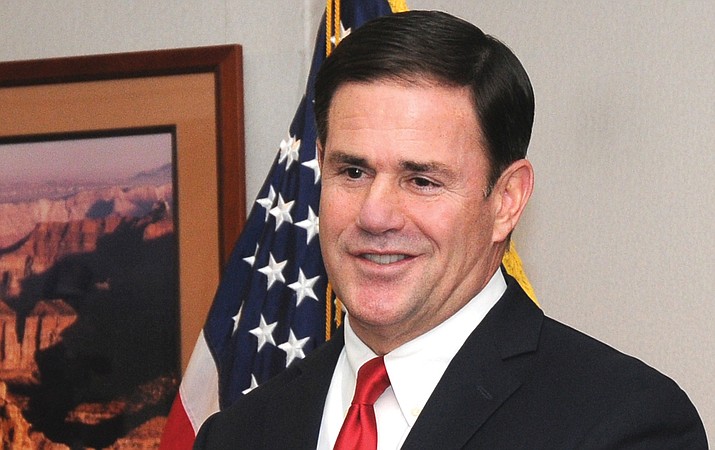 Ducey said he would prefer to focus on why people get disconnected and what can be done to keep that from happening -- aside from a commission rule restricting power companies from cutting the cord. That, he said, includes not just warning customers ahead of their electricity being shut off but working out situations where people have financial difficulty paying their bills. File photo by Howard Fischer

PHOENIX -- Gov. Doug Ducey won't criticize the the rates being charged by the state's largest electric company despite the fact that 8 percent of its residential customers could not -- or would not -- pay their bills this summer.

"I want to see us have successful energy transmission in the state,'' he told Capitol Media Services on Thursday when specifically asked about whether he thinks Arizona Public Service charges its customers too much.

"We are fortunate here in Arizona,'' Ducey continued. "We don't have rolling brownouts and rolling blackouts,'' referring to the recent moves by Pacific Gas and Electric to cut power in a bid to avoid fires.

Those planned shutoffs came as the California utility concluded that high winds and dry temperatures could lead to fires. Officials in that state blamed sparks from PG&E lines for causing a deadly fire nearly a year ago.

But Ducey had his own theory, saying that hundreds of thousands of Californians lost power this year due to "bad public policy'' in that state "and how it results in the discomfort and interruption for citizens and business.''

The governor, however, did not identify what policies he believes there are in California that have led to the scheduled temporary disconnections. And Ducey sidestepped the question of whether he believes he's paying too much to light, cool and heat his Paradise Valley home.

"I am not going to comment on my personal APS bill,'' he responded.

How much APS charges its customers has become an issue as the Arizona Corporation Commission is debating new rules to limit when all utilities can pull the plug on customers who have not paid their bills. And part of that goes to the question of whether a 2017 commission-approved rate hike has made the problem of affordability worse.

Regulators enacted temporary rules earlier this year barring shutoffs between April and Oct. 15. That followed published reports that an APS customer in Sun City West died of heat-related conditions after the company turned off her power on a 107-degree day because she had paid just $125 of the $176 she owed.

During hearings over the issue of shutoffs, some consumer advocates argued that APS customers were more at risk of being unable to pay their bills following that 2017 decision to allow the company to collect another $95 million from customers. That was supposed to cost customers an average of $6 more a month, a 4.5 percent increase.

But APS, with commission approval, also made a series of changes in rate plans, with some customers reporting bills going up by 11 percent. And questions have been raised about whether the company is collecting more overall than it was authorized.

With the moratorium now over, APS has reported it has about 88,000 of its residential customers who have not paid all or part of their bills, about 8 percent of the 1.1 million they serve. But they escaped being turned off because of the emergency rule.

A company spokeswoman said unpaid bills total $30 million, with an average balance between $300 and $400. They now have four months to bring their accounts into balance, though, company officials said they can ask for more time.

By contrast, Tucson Electric reports only about 2 percent of its residential customers who didn't pay their bills -- and didn't lose power but for the moratorium -- putting the figure at 7,645 out of 384,000. The company says it is owed more than $3.4 million with an average bill of $460.

One issue holding up commission of permanent rules on shutoffs is the issue of how hot is too hot.

An initial draft by commission staff suggested barring customers from having their power turned off when the forecast predicts temperatures of at least 95 degrees in the next five days. But that was amended to 105 when Tucson Electric Power and its sister company, UNS Energy, said the lower figure would effectively preclude anyone from being disconnected from April into October.

The governor, for his part, declined to take a side in that debate.

"Well, I would defer to health experts,'' he said.

"I haven't seen the details on it,'' the governor said. "I imagine there's a number that's safer than another number.''

Anyway, Ducey said he would prefer to focus on why people get disconnected and what can be done to keep that from happening -- aside from a commission rule restricting power companies from cutting the cord.

That, he said, includes not just warning customers ahead of their electricity being shut off but working out situations where people have financial difficulty paying their bills.

"And when we make certain that we don't turn off power that would put somebody in harm's way or risk of death,'' the governor said.