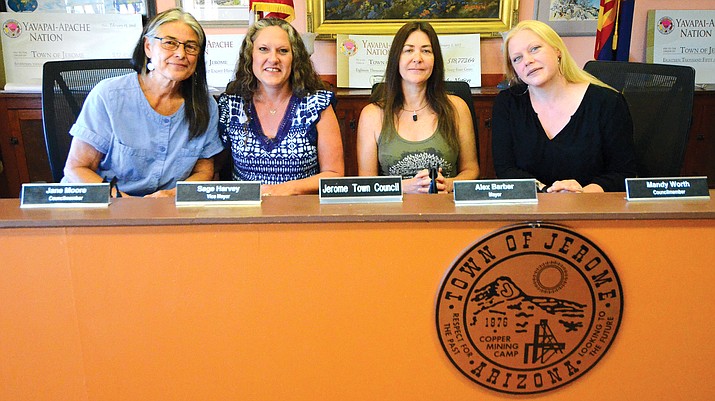 The women council members range from very experienced to a young rookie and two grew up as kids in Jerome. But one thing all four women have in common is they balance their jobs and busy personal lives with the many hours that they serve on the town council. Also in common was the difficulty in finding time to interview them. Deliberating town budgets, crumbling infrastructure, water, tourists and parking can sometimes take 20 to 40 hours a week of volunteer work. The Jerome council voted down a resolution to pay themselves recently and remain the only council in the Verde Valley that does not receive part-time pay.

 Council Member Jane Moore was haying her horses and painting art when called for an interview for Woman’s Magazine. With 14 years on the council, she is the most experienced member. Moore was Jerome mayor in 2004 for two years and vice mayor for eight years. Moore said she remembers three women serving on the Jerome Council in the past, but never four at once. Moore said it has not been unusual for women to be on the Jerome Council or even mayor through the 1980 and 90s. “There’s been lots of women on the council,” she said. Moore said she moved to Jerome in 1972 and remembers women on the council in the 70s and 80s even though there weren’t “too many.” Asked how four women ended up on the council, Moore said: “there were some good choices.” Moore actually was appointed to her latest term when Councilman Hunter Bachrach resigned mid-term. She said she was glad to see some young people step up. Moore said having more women on the council may make some difference, but she said it depends on the person. Sometimes women tend to be “better listeners, but we do stuff that piss people off too.”  Moore, who has been on seven different councils, said she “likes this one a lot.” It’s “fairly dynamic,” one council member moved here recently, two women grew up here and they remember what it was like to be a kid in town, “and I like that. You have some history here.”

 Council Member Mandy Worth - Because of Worth’s busy schedule, we met for the interview at the Jerome Food Pantry where she was picking up food for a relative. We walked behind the Methodist Church on some of the remaining cobblestone roads in Jerome as I interviewed her about being the youngest member of the Jerome council as she carried bags of food. This is Worth’s first time on the Jerome Council, and she’s been on the board for a little more than a year. Worth said she really wanted to wait to run for Council and make sure she was educated about Jerome issues. “I finally ran a little earlier than I planned because I felt a little under-represented,” she said trying to not taking anything away from previous councils. “For several councils, there hadn’t been anyone under the age of 50, there hadn’t been anyone who didn’t own their home out-right.” Worth has no problem expressing her opinion at Jerome Council meetings that can run as long as 11 p.m. and would still speak up even it was all men on the council. Worth said she is aware of other women, and men, in Jerome, who could run for council, but said having families and busy jobs make it difficult for them to run for councils or boards. As far as Worth knew, this was the first council with four women on the Jerome Council. “We’re willing to start from a point of disagreement and come to a point where we are making the best decision for the town.” “I love it,” Worth said. “It’s a lot of work.” There’s a lot of reading and research. “Sometimes it’s hard because I think that there are things that women bring to the table that we look at a slightly different perspective, but then we’re all here in Jerome and we all care what happens here,” she continued. Genders not really an issue when people vote.”

 Mayor Alex Barber has been on the Jerome Council for a total for five years and has been the Mayor of Jerome since Nov. 1. She was born in Jerome and “wearing the Mayor’s hat is lot of hard work.” “ I do love my hometown and want a quality of life that the residents can be proud of. As far as I know three women on a council has occurred rarely. I don’t know of four ever.” Barber said she loved her hometown and wanted to thank “all the former mayors of Jerome.” She said the current board is all “eco-minded” and their budget included a lot of improvements to the town. “I do feel at times I am a bit overprotective of my home town, as I remember a much less loved to death tourist feel back then,” Barber explained in a email to Womans Magazine. “The artist community with a friendly slow pace in the early 80s became a tourist-day trip in the present day.”

 Vice Mayor Sage Harvey was sworn-in as a Jerome councilwoman on Nov. 13th for the first her first-term. She had never served on any other boards or committees. Harvey said she grew up in Jerome with Mayor Alex Barber who asked her to run and she winded up on council. Harvey said she lived in Jerome until she was 19, stayed in the Verde Valley, before deciding to move back up to Jerome six years ago. Harvey remarried her husband on their 20th wedding anniversary during a Jerome town photoshoot at the town’s middle park. “I grew up in Jerome in the 70s and 80s,” Harvey said. “I think all of us girls up here, especially from that generation, are kind of Tomboyish.” There wasn’t a lot to do in Jerome at the time for girls, Harvey explained. “So we hung out with the boys in the tree forts, skateboarded with them, played basketball with them,” Harvey said Jerome does not have a large population of children anymore. There were a lot more children when she was growing up. Jerome is not as family-orientated as when the hippies were coming here in the 70s, she said. As a councilmember, what concerns her is vacation rentals and the pressure it’s putting on the housing market and families or most people trying to move to Jerome. “The more that vacation rentals take over up here, the more we’re squeezed out,” she said. It’s hard to feel stable as a family in Jerome, the new councilmember said. When she was running for council, Harvey said fixing the infrastructure was her main concern that she and her fellow councilmembers are of the mindset that “we are going to get it done.”