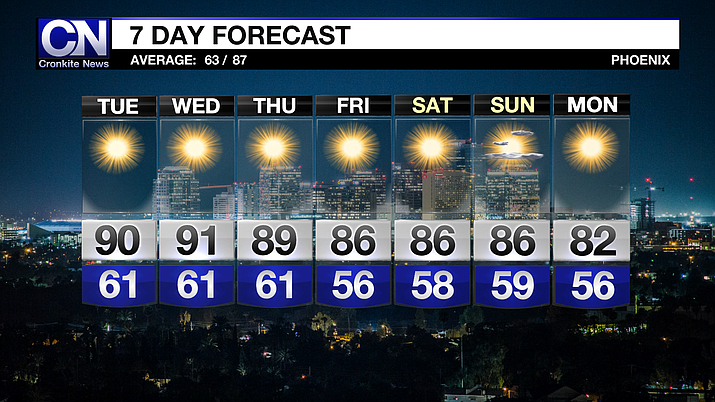 PHOENIX -– This week, the Phoenix area will see a warming trend, followed by a weak storm moving east of the state.

That's expected to drop temperatures slightly and kick up winds across northern Arizona.

High pressure over the eastern Pacific will slowly build over the next couple of days, pushing high temperatures in Phoenix and the lower deserts into the 90s. Morning lows will remain near average, in the low 60s, throughout the week. Our average high is 87 for this time of the year.

Across southern Arizona, temperatures will be slightly lower, with highs in the upper 80s until Friday, when 83 is the forecast high. Have jackets handy in the mornings in Tucson, as temperatures will start off in the low to mid-50s.

On Thursday, a weak storm east of Arizona will increase breezes across the northern high country and the Navajo Reservation. Gusts up to 30 mph will be possible Thursday afternoon, and travelers along Interstate 40 should use caution. Rain and snow will fall over New Mexico and Colorado, but scattered clouds can be expected across northern Arizona before the weekend.

But a more intense storm will begin to drop south from Canada this weekend, suggesting a major cooldown for the state next week.

Details will emerge as the week progresses, but plan on a cool Halloween this year.