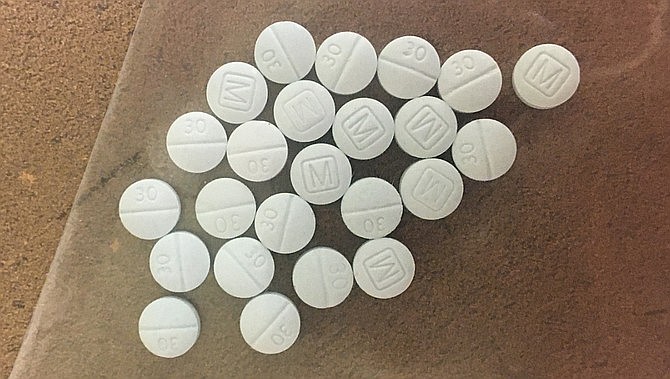 Suspected Fentanyl pills have taken the life of a Cottonwood-area teenage boy, according to a Yavapai County Sheriff’s Office news release issued Wednesday.

Monday, Partner’s Against Narcotics Trafficking detectives were called to a home in an unincorporated area near Cottonwood regarding an overdose involving a 17-year-old boy, who lives at that location.

The boy was found face-down on his bed and his body was cold to the touch, the release states, and medical personnel were called and determined the teen was deceased.

“During an examination of the teen’s bedroom, detectives found an open safe near him that contained 24 off-white pills stamped ‘M/30” the release states.

“The pills were not immediately tested due to the danger associated with Fentanyl, however with the markings of ‘M/30,’ the off-color appearance, along with current trends associating the overall appearance with Fentanyl, and the intelligence known to PANT on the history of such pills, they are believed to be mimic Oxycodone containing Fentanyl,” according to the release.

Detectives suspect the boy was selling the pills because of the large amount of small-denomination bills the teen had.

His death happened on the heels of a number of multi-agency busts in the Verde Valley and nearby that highlighted the amount of Fentanyl being moved into and through the area.

In early September, Cottonwood and Camp Verde officers teamed up on an interdiction patrol along State Road 260, making two arrests and seizing an estimated $900,000 worth of Fentanyl; a PANT operation later that month resulted in the seizure of 400 pills believed to be Fentanyl and almost 20 grams of cocaine.

The boy’s body was released to the custody of the Yavapai County Medical Examiner.

“Initial test results from the Medical Examiner indicate presumptive for fentanyl,” YCSO said in the release.

Yavapai Silent Witness is offering a $1,000 reward for any tip leading to the arrest of anyone selling Fentanyl.

YCSO said the pills found with the boy have an estimated street value of $25 each, or $500.

The boy’s name was not disclosed by Mingus Union High School Superintendent Mike Westcott, who said the 17-year-old was a one-time student at Mingus Union. He said the boy transferred out of Mingus Union after his sophomore year “two or three years ago,” but didn’t have records on whether the student had transferred to another local school.

Calls to American Heritage Academy, in an attempt to determine if the boy was ever enrolled there, had not been returned as of this writing.

Westcott said there was no memorial of any kind planned, nor was there a crisis or large grief-counseling type of staff plan set in motion, but staff are aware of the situation. He also said the district was already examining its curriculum to determine what could be added or modified regarding opioid education.

Westcott said there are no firm plans for a parent and/or student forum or meeting about opioids, but the district is planning such events.

The superintendent said staff are cooperating fully with the Mingus Union resource officer and all other law enforcement in an effort to determine how and where the boy was obtaining drugs and any other efforts to combat drug distribution involving students.