Commentary: Arpaio legendary, even when he doesn’t hold office 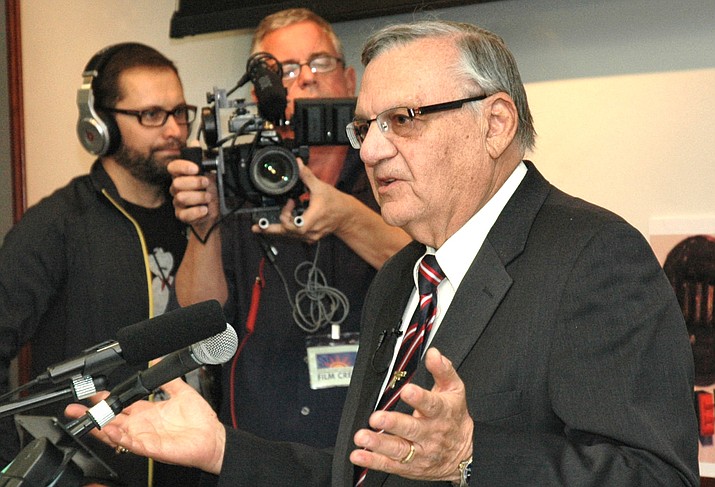 This editorial was recently published in The (Prescott) Daily Courier.

Joe Arpaio is not Yavapai County’s sheriff. Actually, he is no longer a sheriff at all.

But let’s be real: he is still very popular, here and across the country. Think of his famous tent jails, pink underwear and bologna sandwiches for inmates, … and the piles of money in his re-election bank account.

The idea of him leaving office years ago, keeping him from a seventh term in Maricopa County, did come as a surprise.

Prosecutors charged Arpaio, now 87, with criminal contempt-of-court for defying a judge’s orders in 2011 to end his signature immigration patrols. Though that was a misdemeanor contempt charge, and was pardoned in 2017 by President Trump, the now-former sheriff continues to ask that it be expunged from his record.

While Arpaio was not arrested and no mugshot was taken, he still believes he can prevail for violating the court order to stop his immigration patrols. He continues to insist his disobedience wasn’t intentional.

The judge who made the ruling explained pardons don’t erase convictions or the facts of cases and that Arpaio’s clemency only canceled his possible punishments.

On Wednesday, Oct. 23, 2019, an appeals court in San Francisco was set to hear arguments in Arpaio’s bid to erase the contempt of court conviction from his record. He has appealed a lower-court ruling that refused to expunge his conviction barring his traffic patrols that targeted immigrants.

Arpaio’s lawyers previously told the 9th U.S. Circuit Court of Appeals that he was deprived of his opportunity to appeal his conviction because the pardon came before he was sentenced and final judgment was entered, so the conviction must be erased.

It is a double-edged sword.

Arpaio was accused of prolonging his immigration patrols for 17 months to boost his successful 2012 re-election campaign. His defiance of the court order is believed to have contributed to his 2016 election loss as Maricopa County’s top law enforcer. And the 87-year-old lawman is now seeking the Republican nomination in the 2020 sheriff’s race.

On the flip side, his first political comeback attempt ended with Arpaio placing third in the 2018 U.S. Senate primary. Even if the pardon hadn’t been issued, the misdemeanor conviction wouldn’t have prevented him from running again for sheriff — a post to which Maricopa County has paid out more than $140 million in litigation against Arpaio.

While Arpaio’s actions are legendary, we see it like this: he gave up his right to appeal the conviction when he accepted the pardon — and that if the former sheriff wanted to challenge the conviction, he should have rejected the clemency and taken his chances in court.