Residential growth in county not expected to slow down 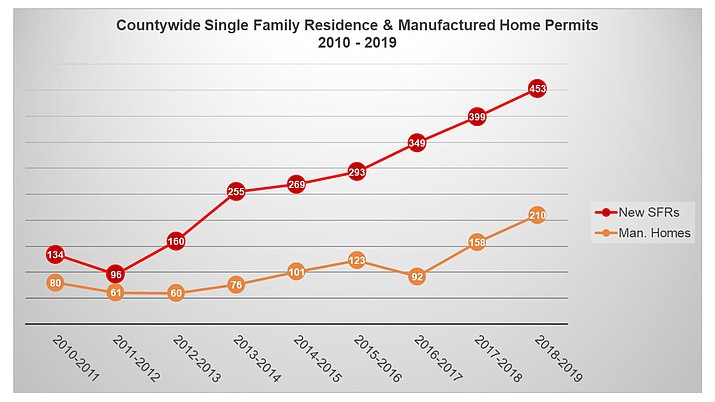 VERDE VALLEY — With each nail and screw put into a house frame in 2019 — every foot of concrete poured, every light switch connected — Yavapai County inches closer to a population of a quarter-million people.

The estimated population of the county, according to the latest U.S. Census Bureau statistics, is about 232,000, and rising quickly.

Yavapai County Development Services Director Dave Williams recently told a crowd at a town-hall type meeting that the county is experiencing its largest population growth in its recorded history, in terms of the number of residential single-family and manufactured home permits being issued.

Williams told the Verde Independent that from Fiscal years 2010 to 2019, the number of housing permits has increased by more than 300 percent overall, with the growth in the Prescott and Prescott Valley areas only slightly surpassing the rate of growth for the Verde Valley.

“The recession caused us to bottom-out around 2011 and 2012, but things have soared since then,” Williams said. “And, looking at the number of wastewater and site investigation requests we’re getting, there seem to be no signs things will slow down any time soon. For the short-term, we think it will grow by at least 10 percent per year.”

Manufactured home permit totals didn’t leap as greatly over most of those same years, but did double in the past two years, going from 92 in Fiscal 2017 to 210 in Fiscal 2019.

Williams said his office receives calls daily from people and realtors wanting to find available land in the area. He also said he knows there are families and individuals in the area every week looking for land or housing.

Williams said construction firms are moving as fast as they can, but a lack of qualified skilled labor is part of the reason for the crunch between excess buyers and insufficient demand of housing.

“Builders are doing all they can to keep up,” Williams said. “No one is overbuilding. Every house built has a family waiting to occupy it the day it’s ready.”

Williams said the permits issued in Fiscal 2019 were between 60 and 65 percent for the Prescott/Prescott Valley corridor, and 35-40 percent in the Verde Valley. Also, many of the newer permits are for houses built in unincorporated areas.

He said the influx is more than the Californians and Phoenix-area residents one meets so commonly in Yavapai County.

“Housing bursts are always tied to several things happening at the national level,” Williams said. “But we’re seeing people move in from all over the U.S., and beyond.”

The most-recent Census data for growth showed Arizona to be the fourth-fastest growing state in the U.S. for the period of July 2017 to June 2018, gaining 1.7 percent in population and growing to 7.18 million people.

The county’s population boom of the last 10 years likely won’t be as big as the boom of the 1970s, when the county added 85 percent more residents.

There are at least three major homebuilding projects in the Verde Valley, Williams said: Two along State Road 89A between Cottonwood and Sedona, and the Primrose planned community in the Rimrock area, for which the county has received a formal permit application, but which has not been put before the county’s planning and zoning commission.

Williams said a new digital system helps his department turn around permits more quickly. In his first two years on the job, he’s made a point of making sure permits are processed as quickly and accurately as possible, he said.