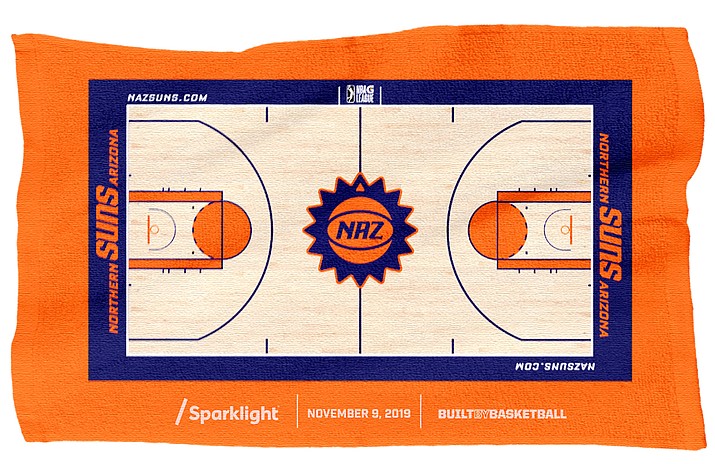 PRESCOTT VALLEY – The Northern Arizona Suns are back.

Nov. 9, the Suns will host Sparklight Opening Night to kick off their 2019-20 regular season.

Sparklight Opening Night will begin on Saturday, Nov. 9, at 3:30 p.m. at the Findlay Toyota Center with special pregame activities, including live music, a bounce house, face painting, and more. At 5 p.m., the first regular season game of the Suns’ fourth season in the NBA G League will begin, with the Suns playing host to the Agua Caliente Clippers.

The first 1,000 fans at Sparklight Opening Night will receive a NAZ Suns Rally Towel, as the team hopes to enhance an already charged atmosphere for the game.

Tickets start at just $10 for Sparklight Opening Night, and can be purchased at www.nazsuns.com/tickets, the Findlay Toyota Center box office, or www.ticketmaster.com.

PRESCOTT VALLEY – The Northern Arizona Suns announced today they have completed a trade with the Raptors 905, acquiring the rights to an NBA champion and a first round draft pick.

Miller (6-7, 210 pounds) has been with the Raptors organization the last two years, playing for both the Toronto Raptors and the Raptors 905. Miller helped the Toronto Raptors win the NBA championship last season, as he appeared in 10 games in the 2019 NBA Playoffs, including Game 3 of the NBA Finals against the Golden State Warriors. He tallied eight points and five rebounds in 28 minutes in the postseason.

Evans was the ninth call-up (eighth player call-up) in Northern Arizona Suns history, earning a Two-Way contract last season with the Phoenix Suns. Overall for the NAZ Suns in his lone season with the team, Evans averaged 15.1 points, 5.8 assists, 3.8 rebounds and 1.6 steals in 32 games (26 starts).

FLAGSTAFF – The Northern Arizona men’s basketball team was ranked at No. 8 in both the Big Sky Preseason Coaches and Media Polls.

The Lumberjacks garnered 35 points in the coaches’ rankings and 150 from the media.

NAU returns a total of five starters and seven letterwinners from last season’s squad that finished tied for eighth overall in the Big Sky.

The ‘Jacks will be led by first-year head coach Shane Burcar, who takes over the top chair after serving as an assistant on the NAU staff last season.

Overall, NAU will return nearly 73 percent of their scoring from a year ago, including reigning Big Sky Newcomer of the Year Bernie Andre, who led the ‘Jacks in both scoring and rebounding, as well as junior Luke Avdalovic, who ranked fifth nationally in three-point percentage.

Following an exhibition game at the Rolle Activity Center on Oct. 28, the Lumberjacks will open the regular season on the road in Tucson at the University of Arizona on Wednesday, Nov. 6 before tipping off the home portion of the regular-season slate on Friday, Nov. 15 vs. SAGU American Indian College at 6 p.m.