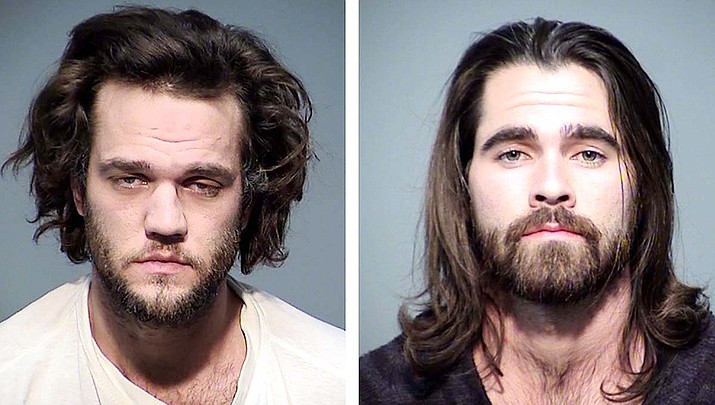 VILLAGE OF OAK CREEK — Two men were jailed last week after a deputy allegedly witnessed a wrong-way driver near-miss and initiated a pursuit that ran from near the Village of Oak Creek to a remote area east of I-17.

According to a news release, Wednesday, Oct. 23, 2019, at about 8 a.m., a Yavapai County Sheriff’s Office deputy was heading northbound along State Road 179, about two miles south of the Village of Oak Creek area, when a white Range Rover drove in the lane occupied by deputy’s marked unit and two other cars. The Range Rover nearly caused a head-on collision with the oncoming vehicles.

The deputy turned around, activated his emergency lights and siren, and attempted to stop the vehicle. Instead of stopping, the driver of the Range Rover accelerated and began again passing several cars on the crest of a hill.

The deputy estimated a vehicle speed of nearly an alleged 100 mph as the driver continued to pull away while running cars off the road.

The driver passed the I-17 exit and headed onto Forest Road 618, and out of sight. The deputy continued along Forest Road 618 and eventually spotted the vehicle via the dust cloud created by the speed.

When the dust cloud dissipated, assisting deputies gathered and began a search.

About an hour later, deputies found the vehicle hidden among trees adjacent to the road, with 26-year-old Andrew Nelson from the Village of Oak Creek sitting in the driver’s seat. Two passengers in the vehicle had disappeared and could not be located.

YCSO says Nelson resisted deputies and remained uncooperative throughout the contact. He claimed the true driver fled the scene.

Nelson was booked into the Camp Verde Detention Center on charges that include fleeing and DUI.

The identity of the two other occupants was discovered shortly after Nelson was booked and included 28-year-old Brett Lahr, a Village of Oak Creek resident.

Deputies contacted Lahr later that day at his home, where he admitted driving the Range Rover and claimed he did not know deputies were following. Lahr described the clothing he was wearing at the time, which matched descriptions provided by deputies who were on scene.

Lahr is an unlicensed driver. He allegedly told deputies that both he and Nelson had been driving the Range Rover with Lahr’s girlfriend as a passenger, and again admitted he was the driver when traveling along Highway 179 toward I-17.

Lahr was arrested and booked into the Camp Verde Detention Center on charges that include endangerment, fleeing and driving without a license. Both suspects have been released pending court action.