Life in the Slow Lane: Sheep-tastrophe 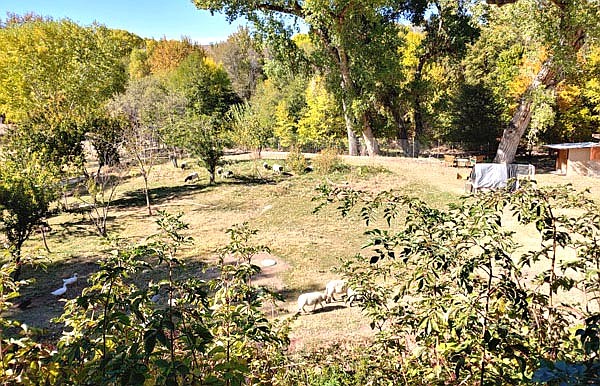 Hey, if cats can have their own word for a situation gone seriously wrong, then sheep certainly deserve a word to describe yesterday. It all started out normally, calmly. I put my five little ram lambs out in the front pasture where they've been now for a couple of weeks. They're doing a great job of mowing and cleaning, I might say. As for the moms and ewe lambs, I sent them to the back pasture.

Then on a whim, I decided to open the gate to the wild hillside. I'd done that for the boys a few weeks back and they had a blast. There's nothing little lambs like better than skittering up and down rocky slopes. The boys enjoyed themselves so much that they didn't want to come in at night. They're doing something similar here in the front pasture, crossing the bridge over the ditch to reach the mulberries and elderberries. Although it's not was wild or large a space as the back hill, it's plenty rocky and steep.

Believing everything was in hand, I went back to the computer to build the print book. About an hour later, I glanced up. From my computer I can see the top of the front barn and the massive cottonwoods that line Oak Creek, and a tiny slice of the front pasture...where Tiny was standing.

WHAT?! I jumped up out of the chair and dashed onto the porch. It wasn't just Tiny. All six girls were now in the front pasture with the boys. The boys who are now perfectly capable of making more little lambs! This was a complete catastrophe. I had no idea how long the girls had been there. More importantly, I had--and still have--absolutely no idea how they got there. I'd walked the hillside to the forward gate, just to be sure it was locked. So were three other gates between where they'd been and where they were.

This was no time to be castigating myself over what had gone wrong. I needed to stop any more wrong from happening. Down I raced and into the barn I went to grab a half a flake of hay. A few short steps took me to the gate between my property and my neighbor's middle pasture. By then, I had eleven sheep all looking for a handout.

Fortunately, nothing stands between my four ewes and the potential of a snack, including their babies. I opened the gate. Tiny bulled her way in, Mari and Rosie close on her hind quarters. Milly's little boy Blackleg made a dash for it and I slammed the gate on his neck. He backed off, but so did Milly. She remains my shyest ewe. A little more cajoling and gate fluttering resulted in Rosie's little girl in the pasture, but that was as far as anyone was willing to go.

I stepped inside the gate and stole back a handful of hay. Since both Milly and her sister, Mari's new little girl, wanted to be with their mother, I threw the hay back of them for the boys. And just like that, I again had separated sheep--although who knows if I have "open" (not pregnant) ewes.

Since what was done was done, I went back to work and suddenly it was time for evening chores. I rose from my desk and looked out at the front pasture and...the gate between Al and Elena's pasture and my property was wide open.

My jaw dropped. That wasn't possible. I had chained it myself. I knew without doubt that after what had happened earlier, there was no way I'd missed anything.

I looked around the front pasture. No sign of sheep. Down I ran from the house to the barn. (The ramp that crosses the ditch and leads to the barn is some serious crossfit machine. I run up and down that incline a number of times a day. I figure if I can run up and not lose my breath I'm in pretty good shape.)

Stopping in the open gateway, I look to my right. There, chewing their cud, were all eleven of my sheep. Fortunately, it was afternoon chore time, and that meant Tiny and her girls were once again waiting for hay even though they'd already had their portion for the day. With Christina's help, they were once again separated and settled for the night. Lately, I've been putting the girls in an alleyway and leaving the little boys free to wander and graze.

This is because if Radha chooses to chase the boys, Mr. Headbutts chases back. Watching them play tag is pretty funny. He headbutts her and dashes away. She follows, running circles around him, then dashes away. He follows her and headbutts her again. She had a bone a few nights ago. The lamb kept coming up to her, just trying to smell it. You know, just in case he wanted some. It became a game of "keep away."

At any rate, that's my confusing, bizarre, impossible story for this week. I have no idea how either thing happened and I suppose I never will. But I will know in five months if any of those girls were in heat. Sigh.