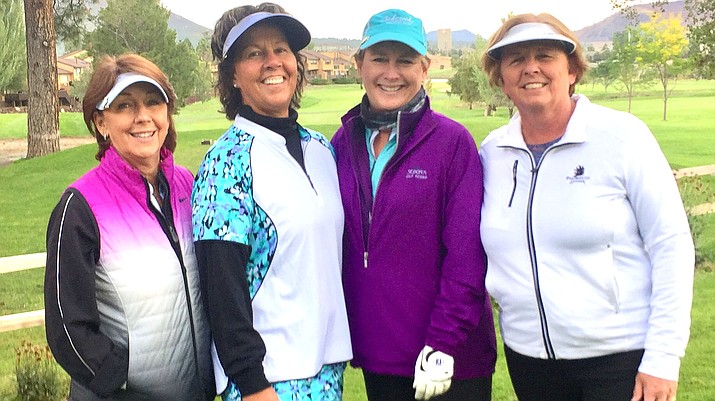 A big congratulations goes to Oakcreek Country Club’s Women’s Golf. Throughout the spring and summer the women with the lowest handicaps (who are available to play) compete with seven other clubs to earn the award for the lowest overall gross and net scores. The Oakcreek women took home the score for the lowest net, missing the low gross score by just a half point.

The winner of the low gross was Talking Rock Golf Club in Prescott, with Prescott Lakes in second place. Elephant Rocks, in Williams, came in with third low gross.

The ladies pictured played in the last Team event on September 23rd at Continental. Lori Zaun, Joanne Puzak, Lynn Winslow, and Donna Cantello represented the club well. Other members of the Team were Penny Fischer, LeeAnn Morgan, Julie Larson, Barbara Erickson and Marion Maby. Finally, a big thank you goes to Donna Cantello, our team captain, who made sure we had strong representation throughout the season.