Shutoff of senior woman’s electricity leads to calls for reform 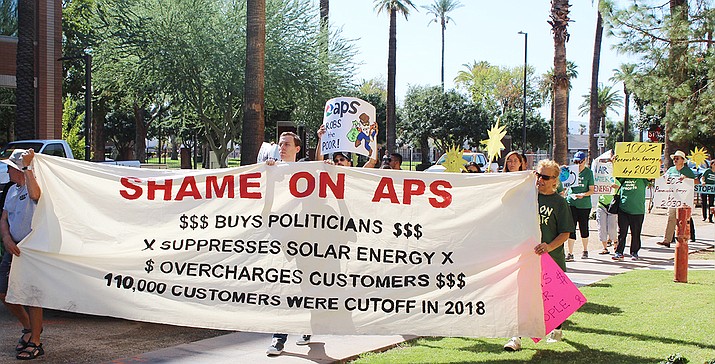 About 30 protesters marched around the Arizona Corporation Commission building in Phoenix before an early September meeting on APS shutoff policy. (Photo by Jake Eldridge/Cronkite News)

PHOENIX – “How do you feel knowing that someone died because of one dollar?”

Arizona Corporation Commissioner Sandra Kennedy asked that question of Donald Brandt, chief executive of utility company Arizona Public Service, as he sat at before the commission.

APS has been under public scrutiny since the Phoenix New Times broke a story in June about a Sun City woman who died after her electricity was disconnected for nonpayment in the summer of 2018.

Brandt replied that if Pullman had called APS, the company would not have shut off her electricity.

For weeks, demonstrators, advocates and representatives from the electricity provider have come before the commission to plead their cases about what’s right not only for them, but for APS and other utility customers.

There is no state standard on how and why a customer’s utilities are cut off. The corporation commission is considering reforms for the 16 electricity providers it oversees. It’s working with veterans representatives and advocates for the aging, as well as utility companies, on proposed reforms that may restrict disconnections or put a moratorium on disconnections during the summer months. After the New Times story was made public, the company began a moratorium on shutoffs that ended Oct. 15.

Stephanie Pullman died in her home on a 105-degree day in 2018 after falling behind on her bills. She had made a partial payment to APS but it was too late.

It’s unclear how much she Pullman owed, but Kennedy said if she just had paid about a dollar more, her electricity would not have been disconnected. APS officials said they have settled the case with Pullman’s family.

In one heated daylong meeting, an activist for veterans urged the commission to take action.

“You’re the only protection for all of us,” said Barry McCain, who represents Arizona veterans with disabilities. He stressed how many of his fellow veterans have fallen on hard times and feel they aren’t getting the proper support.

The session came a month after APS executives were asked how many people died in the heat and what methods APS used to notify people who risked disconnection for nonpayment.

That meeting led to the calls for reform on shutoffs. Proposals vary in degree and consequence.

One idea the commission has suggested is to suspend shutoffs once temperatures hit 95. APS suggested 105.

“105 degrees is unacceptable for Arizona, and we can’t use other states as our point of information,” said Kennedy, who has been an outspoken critic of the company’s procedures. “Arizona stands alone.”

APS officials also were asked about how they issue final notices for customers who are close to losing power.

Under APS procedure, a utility worker leaves a written notice at the residence but does not speak with the customer. Critics said notices can be missed, removed or blown away.

Such safety visits would ensure there is person-to-person contact and that the customer understands when and how their power will be shut off, and how it can be reconnected, Jennings said.

The bottom line: Kennedy said it may take up to a year for a new policy to take shape.

“We would like to see a safety visit when someone’s power is going to be terminated,” said Stephen Jennings, associate state director for AARP Arizona. “We think that the utilities should knock on the door and make sure it won’t endanger their safety.”