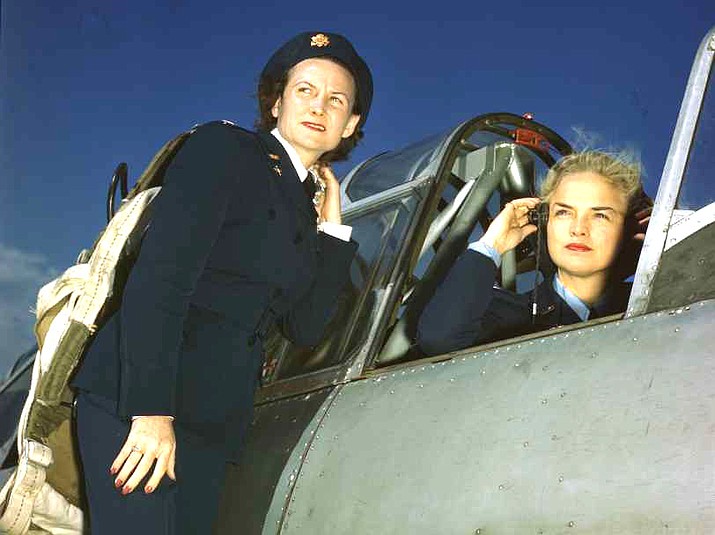 WASP Ann McClellan adjusts her earphones in the cockpit of a BT-13 while Anne Johnson stands on the wing of the plane.” Credit:  Image 4A-22688-K3615, Record group 342, National Archives and Records Administration at College Park, College Park, Maryland.

Celebrate Veterans Day by attending a speaker program about the original “fly girls.”

Monday, Nov. 11, 1:30 p.m.. at the Church of the Nazarene, 55 Rojo Drive in VOC, Natalie J. Stewart-Smith will present “The Women Airforce Service Pilots (WASPs) of World War II.” At this program, Stewart-Smith will share the stories of brave women fliers who had to fight for the right to be called veterans.

Their main duty was to ferry planes from factories to embarkation points. These women pilots flew 80 percent of all ferrying missions, delivering over 12,000 aircraft of 78 different types.

As a result of their efforts, 900 male pilots were freed for combat duty. In addition to ferrying planes, WASPs performed engineer test flying of repaired aircraft and did towing for live-target gunnery training.

By the spring of 1944, every P-51 Mustang flown in combat had already been flown by a WASP.

Thirty-eight WASPs died serving their country during World War II: 11 died during training and 27 were killed on active-duty missions.

The WASP program formally ended on Dec. 20, 1944, eight months before the end of World War II. For many years Jacqueline Cochran, the first female aviator to break the sound barrier in 1953, and others lobbied for the WASPs to be recognized as veterans.

Finally, on Nov. 23, 1977, more than 30 years after the WASP program started, President Jimmy Carter signed a law to give WASPs veteran status. In 2009, President Barack Obama signed a bill to award the WASPs Congressional Gold Medals, one of the highest civilian honors awarded by the United States Congress.

Natalie J. Stewart-Smith, a speaker for Arizona Humanities, has been an educator for over 25 years and has taught at the elementary, high school, and college levels. As a former Army officer and historian, she is interested in women’s contributions to the military, particularly those of women who served as military aviators.

The program, generously funded by Arizona Humanities and Friends of the Sedona Public Library, is free and open to the public.

For more information about this program or other programs at Sedona Public Library, a nonprofit 501(c)(3) organization, please stop by or call the Library at 928-282-7714.

You may also access the Library’s website at www.sedonalibrary.org to view the events calendar or to make an online donation.