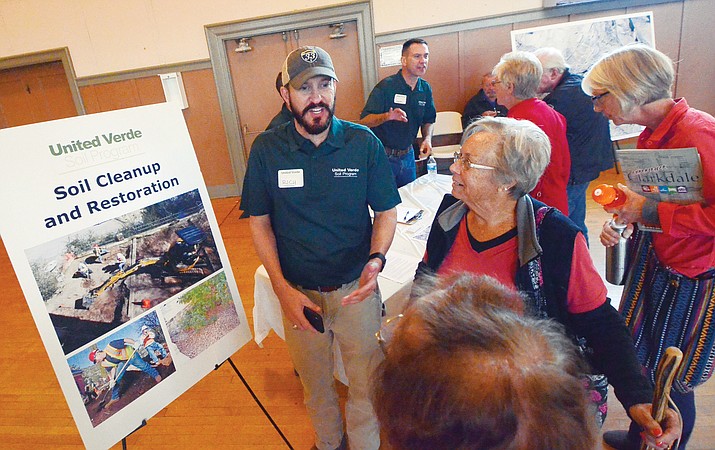 CLARKDALE -- The United Verde Soil Program, aimed at cleaning up contaminated soil at homes and public properties in Clarkdale, has resumed after the soil removal was suspended last year.

The new clean-up crew from USA Environmental, which is based in Texas with regional locations around the country, has already begun cleaning up the soil on properties, according to  Freeport Mineral’s Corp. spokesman James Telle.

Lande was at a community meeting Tuesday night at the Clark Memorial Clubhouse between Freeport and Clarkdale residents.

When the community center property is approved, Lande said the crew will move on to residences in the Nation, which is an area adjacent to Clarkdale.

The new current cleanup crew will increase to about 35 workers and it will take about three years to complete the soil removal, said Lande.

Crews try to concentrate in one area at a time for efficiency. Then, they move onto locations where they left last year in Clarkdale, she said.

In 2018, crews hired by Freeport first began cleaning up contaminated soil from yards and public property in Clarkdale, but the voluntary project stopped when the clean-up subcontractor left town in October.

Crews have completed removing the soil and replacing the lawns, landscaping and trees at Clarkdale’s Main Street Park and in about 50 yards at private homes, she said.

As of September 2019, Freeport stated that the owners of approximately 80 percent of properties within the Clarkdale study area have elected to participate in the cleanup program.  Lunde said that leaves roughly 450 homes to finish in the next three years.

To store the contaminated soil, Freeport has built a lined soil repository on its property off Sycamore Canyon Road across from the Lower TAPCO parking lot.

The United Verde Copper Co. ran a copper mine and smelter in Clarkdale in the early 1900s and air emissions from the smelter deposited metal particles on the soil. Freeport voluntarily initiated the clean-up program with Arizona Department of Economic Quality oversight.

The goal of the UVSP program is to clean up the property from smelter-related impacts to the soil in Clarkdale from the former smelter, which operated until 1953, Telle said. Freeport is offering soil replacement and restoring of the landscape at no cost to property owners.

Freeport operates an Outreach Office at 200 N. Broadway in Clarkdale that is open to the public and representatives are available to answer questions in person, by phone at 928-649-3614, or via email at UVSP@ghd.com