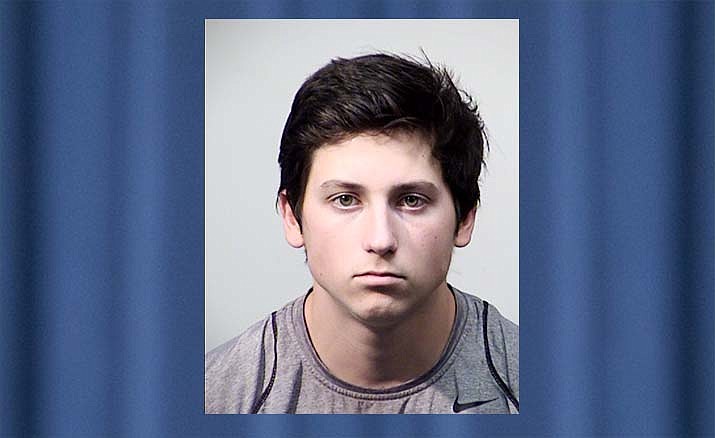 SEDONA – Nineteen-year-old Thomas W. Zielinski allegedly was in the parking lot of Sedona Red Rock Junior-Senior High School last week with a gun, potentially to intimidate a student. Further, he allegedly arrived on the school campus in a car Thursday after being issued a no trespassing order earlier in the day.

That is the emphasis of an email sent to Sedona parents Sunday at 12:57 p.m. by school district Communications Director Jennifer Chilton.

Zielinski was arrested Friday at about 2:30 p.m. by Sedona police following a lockdown incident at the junior-senior high school that began shortly before noon Thursday. According to a Sedona Police Department news release, Zielinski was arrested and booked into the Yavapai County Detention Center in Camp Verde on charges of possessing a deadly weapon on school grounds, reckless handling of a firearm and misconduct involving weapons.

“You may have now seen arrest details in the local news, but the Sedona-Oak Creek school administration wants to assure that our families receive updated information directly from us as well,” Chilton stated in the Sunday email to parents.

She continued: “When Sedona police officers located the individual they were seeking on Thursday at a Sedona residence, they issued him a ‘no trespassing’ order prohibiting his entry to school property at any time. Later that day, at approximately 5 p.m., he entered the campus parking lot in a vehicle. This trespassing violation is one of the charges of his current arrest.”

Chilton continued to inform parents that during subsequent interviews, “The Sedona Police Department gathered evidence that the suspect had been in the campus parking lot earlier in the week in possession a gun, potentially to intimidate a student. This is the basis of his disorderly conduct with a weapon charge. The police department has confiscated this gun. He has also been charged with possessing a gun in a vehicle under the age of 21 and with the charge of having a weapon on a school campus.”

Thursday, Sedona PD issued a news release stating a Sedona Red Rock school resource officer, who was already on campus, was alerted that a former student was coming to the school.

Sedona PD reported the school resource officer spotted and recognized a vehicle regularly driven by Zielinski in a school parking area and initiated a lockdown of the school at about 11:45 a.m.

By about 12:45 p.m., Zielinski was located, and the lockdown ended with all students safe.

“Student safety is our highest priority,” Chilton stated in the email to parents. “We appreciate the patience and serious behavior of our students during Thursday’s campus lockdown, and parents’ patience and diligent follow up as well. We are always grateful to our law enforcement and other emergency partners in student safety preparation.”

Sunday morning, Sedona PD Patrol Lieutenant Stephanie Foley indicated in an email to The Verde Independent that a follow-up news release on Zielinski’s arrest is forthcoming.