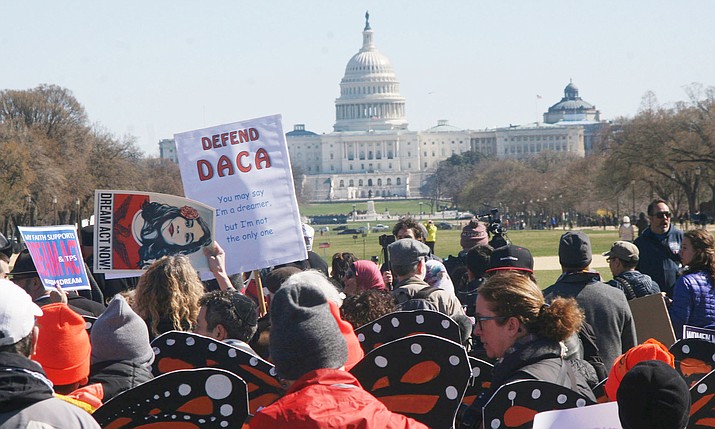 Protesters marched in Washington, D.C. on March 5, 2018 – which was supposed to be the final day for DACA, but legal challenges have since kept the deferred deportation program alive. The Supreme Court is scheduled to hear the case this fall, and Arizona has joined other states asking the high court to strike down the program. Photo by Austen Bundy/Cronkite News

WASHINGTON, D.C. — Arizona joined 12 other states this week that asked the Supreme Court to roll back Deferred Action for Childhood Arrivals, a program that they say has caused “irreparable harm” to their states.

The brief was filed on behalf of 12 attorneys general and one governor, all Republicans, who claimed that the program is unlawful and urged the Supreme Court to overturn lower courts that have so far blocked Trump administration efforts to end DACA.

It was two years ago next week that the administration said it would “wind down” DACA, an Obama-era program that protects immigrants who were brougt here illegally as children.

The executive order deferred deportation of recipients for two years and allowed them to get work permits and drivers licenses, among other benefits.

The states calling for an end to the program said it has strained their finances as they have had to provide services such as health care, education and law enforcement for recipients – the so-called “Dreamers.”

Texas Attorney General Ken Paxton, the lead official on the brief, claimed that his state alone spends $250 million a year on services for DACA recipients.

Arizona Attorney General Mark Brnovich, who signed on to the brief, did not respond to requests for comment on it this week.

But one immigration advocate called it “insane and despicable” that Arizona is joining with the other states to try to end DACA. Petra Falcon, executive director of Promise Arizona, said she was surprised Brnovich is working to overturn a policy that she said has wide support.

“I’m surprised that there is not closer communication with their communities,” Falcon said of the officials behind the brief. She said Dreamers are not a drain on society as the brief claims.

But Matt O’Brien of the Federation for American Immigration Reform, a group that advocates for limited immigration, defended the challenge to DACA, which he calls unlawful.

“Many of these people are now adults and have been aware since their early teen years that they were not lawfully present in the United States, and yet they didn’t leave which they’re legally obligated to do,” O’Brien said.

He said President Donald Trump is correcting what he called an unlawful action by then-President Barack Obama, who created DACA through an executive order in 2012.

Despite Trump’s threat to end DACA, however, the number of active recipients has remained relatively steady, as courts have blocked the administration’s plan. U.S. Citizenship and Immigration Services reported that there were 660,880 active DACA recipients in June, down from the 689,800 who were covered in September 2017.

The attorneys general point to court rulings striking down related programs – an expanded DACA and a deferral program for parents of DACA recipients – as proof that DACA should suffer the same fate.

But critics accuse Republicans of using scare tactics in their fight against DACA, which one called a “stunt.”

“This stunt is out of step with our state’s values … Arizona Democrats recognize we need smart immigration reform,” said Matt Grodsky, a spokesperson for the Arizona Democratic Party. “This is not the way to achieve that.”

The Supreme Court combined three cases that successfully challenged the Trump administration’s “wind down” of DACA into one case, which it is scheduled to hear arguments on in November.

Arizonans have hand in, eyes on this week’s DACA hearing
Court defers question on ‘dreamer’ driver’s license to Department of Justice
AG gets no help from Trump to deny driver's licenses to 'dreamers'
Governor says best 'dreamer' direction should come from Congress
Supreme Court: No tuition break for 'Dreamers' in Arizona