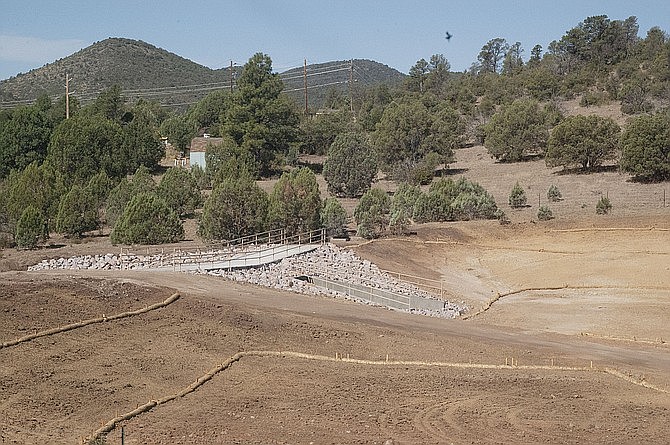 Water and drainage concerns are among the items the Yavapai County Board of Supervisors will consider at their meeting Wednesday, Sept. 4.

The meeting begins at 9 a.m. and will be in the Board of Supervisors’ hearing room, first floor, of the Administrative Services Building, 1015 Fair St., Prescott.

All incorporated communities in the county pay taxes into the Flood Control District. “As part of that we create an IGA and give them that money back, most of it, sometimes more,” she said, adding that the two IGAs this meeting are with the City of Cottonwood ($462,000) and the Town of Chino Valley ($145,000), strictly for drainage projects.

Three are for the Ho Kay Gan regional storm water detention basin project, which is visible from Williamson Valley Road, just south of its intersection with Pioneer Parkway. One is a $13,245 contract for construction of the Liberty Baptist Church’s driveway.

“We’re paving the driveway as a thank you for letting us use that during the project,” she said.

The other two basin project items are to extend the time limit for engineer review of the work and removal of material.

Since 2015, the county has been working with the public regarding drainage concerns in the area of the Ho Kay Gan Village and Tonkawa subdivisions. It has included studies, and the project, which is on State Land, has cost $586,137.

The sixth Flood Control item on Wednesday's agenda is with Civiltech Engineering for work at the Juvenile Detention Center, where a berm protects a six-foot diameter pipe, Whitman said. Last year, rain washed out the berm, and a debris project is underway, but “we want to do something more substantial to protect that pipe” and the property.

Also on the agenda, the board is expected to:

• Approve a Planned Area Development amendment for the expansion of the PAD boundary of a 64.87-acre parcel in Paulden located off East Perkinsville Road on Blissful Path; by adding two parcels of about 10 acres each currently zoned RCU-2A; among other applicant requests, such as a new office, retreat huts, a dining facility, chapel and more.

• Approve funding for an appropriation of money from House Bill 2747, for Pretrial Intervention Programs.

• Renew the agreement for CodeRED for emergency communications.

• Approve printing and mailing of the 2019 Property Tax Notices.

In all, the Board of Supervisors agenda contains three hearings, one action item, and 37 consent agenda items. The consent agenda may be approved with a single vote.

To view these in more detail, visit tinyurl.com/yy5zke47.