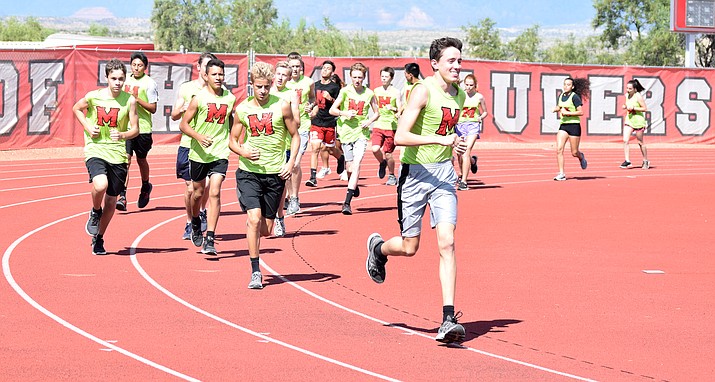 Mingus cross country runners warm up for practice on Wednesday afternoon. The Marauders have bright colored shirts to run in so they’re more visible around town. VVN/James Kelley

With its biggest squad in years, Mingus Union cross country is looking to send more runners to State.

The Marauders are up to about 37 runners this year. Mingus Union opens up the season on Saturday at 8 a.m. at the Peaks XC Invite at Buffalo Park in Flagstaff.

“We’re looking pretty solid,” Mingus head coach Dave Moncibaez said. “Numbers are great, higher than they’ve been in a lot of years. We’re looking at about 37 runners right now and tough. We had a good work out (Tuesday) and we keep improving every day, especially now that the sun’s kinda letting up a little bit, the heat. So that’s actually helping us a lot and we’re excited about this Saturday out to Flagstaff for the Peaks Invitational and I think the kids are ready to put themselves to the test. It’s gonna be really tough competition up there but I think we’re ready and I think they’ll surprise themselves.”

Moncibaez attributes the growing popularity of the program to the buzz around it.

“We’re creating a buzz and a lot of runners are like ‘come out and run’ and I enjoy having them and they’re having a lot of fun together and they’re working hard so it’s what it’s all about: the kids having fun and putting in some work at the same time,” Moncibaez said.

The girls side is smaller of the two but packs a punch and the boys have so much depth they’ll present a problem for the coaches.

“The girls look solid, very solid,” Moncibaez said. “We’re going to have a tough time with the boys at the end, who we’re going to pick to go to Sectionals but we have a nice handful of boys, the question is which ones are going to go? So that’s a good and tough decision but a good position to be in.” 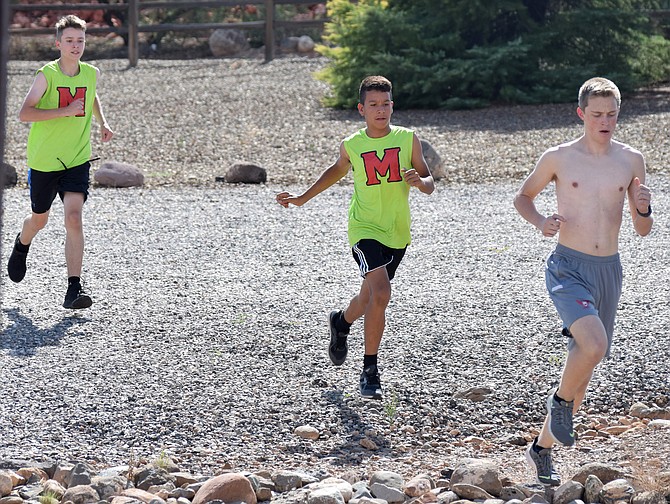 The depth causes the runners to push themselves in training.

“It’s good for them because they compete against each other in practices and we’re excited to get some times behind our belt and kind of see where we’re at and where we need to grow,” Moncibaez said.

After the Peaks, the Marauders go to Payson and then on Sept. 21 split up to send some runners to the Four Corners Invitational, also at Buffalo Park and some to Camp Verde’s meet.

“We’re at Flagstaff Saturday and then Wednesday we’re in Payson and then I think we go back to Flagstaff the following Saturday,” Moncibaez said. “We’re actually in a position to split the team, so we’re actually gonna be in Flagstaff and Camp Verde, so that’s a good thing for us as a program to be able to have the numbers to split ‘em up and be able to go to two different competitions So that’s a fun thing to do.”

He thinks the last time they had enough runners to split the team like that was when Jim Bostwick ran the program and it was winning state titles. Although Moncibaez is in his second year coaching cross country at Mingus Union, he has been a PE teacher there.

“They’re a great a bunch of kids, hard working kids and I think they want it just as much as I do. They’re competitive in their spirit and I think they’re just excited for this Saturday to finally get out there, put their hard work to the test,” Moncibaez said.