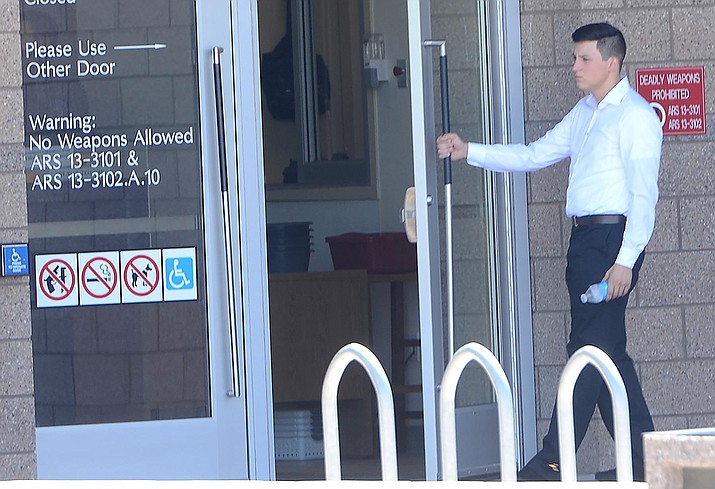 CAMP VERDE -- The 19-year-old Sedona man accused of pointing a handgun at a Sedona Red Rock High School student last week made his first Superior Court appearance since being released from jail.

Thomas W. Zielinski appeared in Yavapai County Superior Court Thursday before Judge Chris Kottke, needing fewer than five minutes to explain his need for a public defender and to find out a preliminary hearing date.

Zielinski was booked into the Camp Verde Detention Center Aug. 30 on multiple charges, including carrying a concealed weapon in a vehicle by a person younger than 21, reckless handling of a weapon, possession of a deadly weapon in a school zone and trespassing.

His preliminary hearing is set for Tuesday, Sept. 17, 4 p.m. He will have a public defender assigned to his case.

According to a statement of probable cause, Zielinski, Sedona Police charge, brought a handgun onto the high school campus Aug. 27.

He is not a student at Sedona Red Rock High School.

While parked in a student parking lot, Zielinski eyed a 17-year-old boy who he believed was spending time with Zielinski's girlfriend, with whom he had been having a dispute. As the 17-year-old drove past Zielinski's vehicle, Zielinski pointing the gun at the victim, according to a statement of probable cause.

Three days later, on Aug. 30, the high school's resource officer was contacted by someone who believed Zielinski was headed to the campus. This led to the one-hour lockdown; Zielinski was located off-campus and was questioned.

Zielinski allegedly returned to the school campus in a car later that same day, despite having been issued a no trespass order earlier in the day, according to school officials. Sedona Police arrested Zielinski the following day — Aug. 31 — at about 2:30 p.m.

He was released from jail early this week on a $5,000 secured appearance bond.

He was ordered by the court to have no contact with the alleged victim in this case.