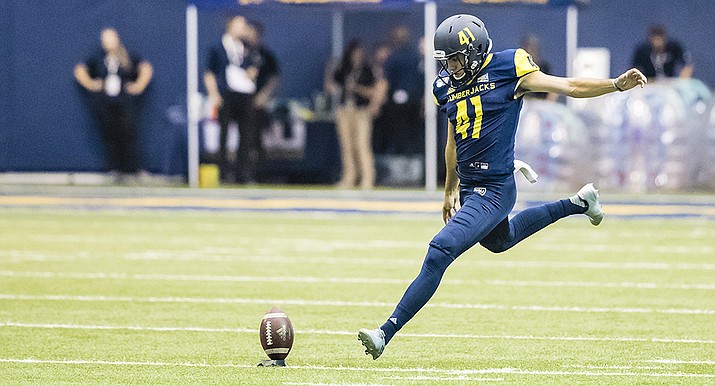 NAU junior Luis Aguilar won Big Sky Special Teams Player of the Week after scoring 12 of the Lumberjacks’ points in their 37-23 win over Missouri State at home in the season opener. Photo courtesy NAU/ Rick Johnson

Aguilar enjoyed a career performance in the Lumberjacks’ season-opening 37-23 victory over Missouri State on last Thursday night as he connected on all three of his field goal attempts of 48, 21 and 46 yards. He also drilled a career-high seven kickoffs for touchbacks and was a perfect 3-for-3 on extra point conversions.

The 48-yard field goal represented a career-long for Aguilar, who entered with a previous long field goal make of 38 yards, which he also bested with his 46-yard boot in the fourth quarter.

The weekly conference honor marks the first of Aguilar’s career and he is the first NAU player be recognized by the conference since Jalen Goss was named Big Sky Defensive Player of the Week on Oct. 8, 2018.

The Lumberjacks (1-0) return to action on Saturday, Sept. 7 when they travel to Tucson to battle the University of Arizona in a 7:45 p.m. MST kickoff that will be televised live on Pac-12 Networks.