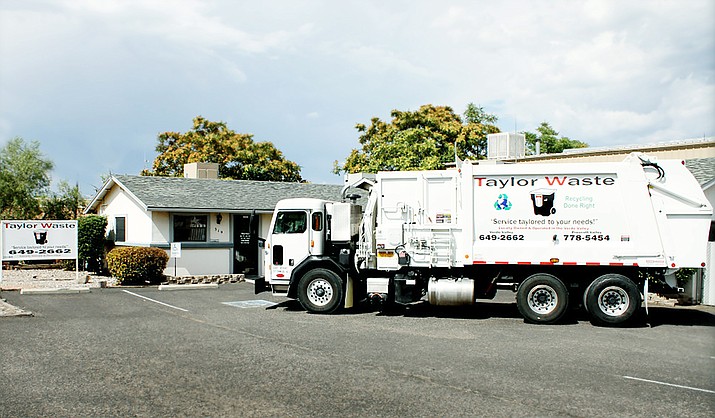 An April 9 work session produced a mixed bag of concerns about solid waste pickup in Cottonwood. Tuesday, the Cottonwood City Council will take up the issue again. VVN file photo

Tuesday, the Cottonwood City Council will take up the issue again.

A 6 p.m. work session will be held at the Cottonwood Recreation Center, 150 S. Sixth St.

The April Cottonwood City Council work session explored different options in its waste and recycling management. The city has a longstanding policy of not regulating residential waste or recycling operations, according to staff.

No council decisions or votes will be made at Tuesday’s work session, though the agenda does call for “direction to staff.”

Three major providers —Patriot Disposal, Taylor Waste and Waste Management — are all choices for City of Cottonwood residents. Council members Michael Mathews, Doug Hulse and city staff expressed concern for the amount of wear and tear on residential streets by the heavy trucks, some of which have overlapping routes, as a street could have all three providers chosen by its residents.

One area waste hauler company owner, Chris Taylor, of Taylor Waste, is opposed to the idea, and wants to see free competition prevail.

“Competition is a good thing,” Taylor said. “When there is more than one company, each one has reasons to improve. Maybe some other company starts doing a lousy job, so I get more business, or someone figures out how to do something better or cheaper, so I lose out. Either way, we’ve welcomed the way the city has been mostly hands-off, and we’d like that to continue.”

Cottonwood City Manager Ron Corbin said that the result of the April 9 work session was that staff was directed by Council to work on the topic. At that meeting, Corbin said staff would also provide some sustainability criteria in an RFP process, should Council choose that option.

Vice Mayor Tosca Henry said at the April 9 meeting she felt it was unfair for council to speculate on what the haulers in town can do. She also said she wants to gather more information related to recycling options, and her sentiment was echoed by Council Member Ruben Jauregui.

According to research from the City of Sedona, a single trip from one of these trucks is equivalent to 1,000 passenger car trips. Ways to combat this type of wear on Cottonwood streets, according to city staff, include choosing a single-source provider, opening up a bid process with a request for proposal or charging fees to providers to offset street impacts.

Taylor said he thinks looking at trash trucks as a major source of street wear — be it on arterial or residential streets — is unfair.

“As more people order stuff online, you see courier-service trucks, like UPS and FedEx, everywhere, in neighborhoods,” Taylor said. “And on the main streets, cement trucks, construction (vehicles), dump trucks, buses, 18-wheelers — none of them tiptoe down 89A.”

Taylor said Cottonwood’s open choice of solid-waste providers is more the rule in the area, whereas the type of single-source arrangement the Town of Clarkdale has with Patriot Disposal is less common. There are even fewer counties and cities, Taylor said, such as the Town of Prescott, where government employees still haul trash.

Cottonwood Mayor Tim Elinski suggested, at the April 9 meeting, that two private companies could combine talents, equipment and other resources and serve the city even better.

Taylor said having multiple small businesses, whose revenue comes from the private sector, is a great way to grow the community. If all communities in an area had single-source contracts, if a business like his were underbid by larger companies, he’d be out of business.

“We contribute, in different ways, to things like FFA, Thunder Valley Rally and Walking on Main,” Taylor said. “More businesses equals more contributors to the community.”

Cottonwood explores waste, recycling options
More than 200 at work session on trash hauling
Commentary: When it comes to garbage, there is no shortage of trash talk
Letter: Cottonwood should not create monopolies for private companies
Changes in store as city's solid waste transfer station operating in the red