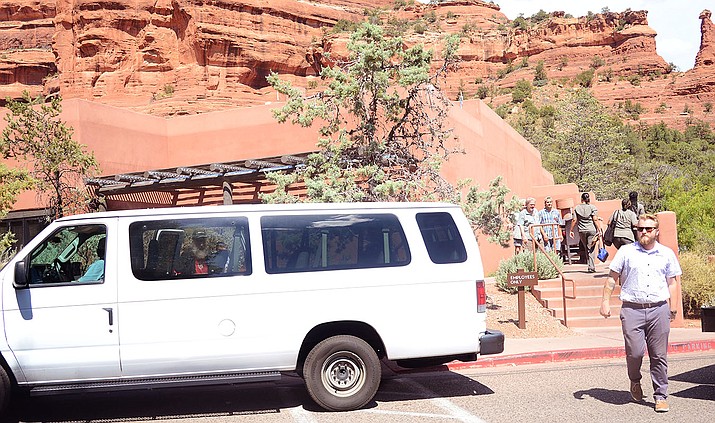 The Enchantment Resort bus runs from Clarkdale and Cottonwood to Sedona and is popular enough that almost 20 percent of the Sedona resort's employees have taken advantage of the service, . VVN/Vyto Starinskas

SEDONA — One of the largest resorts in Sedona is running a bus service for employees who need transportation and might be having a difficult time finding housing in Sedona’s tight housing market.

The resort, which employs over 550 Verde Valley residents, shuttles employees daily because local public transportation does not always coordinate well with the schedules of resort workers.

The bus service is a great selling point at the local job fairs he attends in the Verde Valley, Osborn said.  He said he “yells from the roof-tops” to let job seekers know about the free transportation.

“It’s a huge benefit and people are pretty excited to hear about it.”

The resort hires everyone from accountants to concierges to servers to maids, and Osborn said he would have a difficult time filling all those jobs without their bus service.

The bus picks up employees at the Bent River apartments in Clarkdale at 5:30 a.m., which the Enchantments owns and operates as employee housing.

The bus then picks up more employees on Apache Street in Cottonwood, then Safeway, Walmart and Vineyard Church on Zalesky Road. Then the bus makes one more stop on Dry Creek Road, Here the riders connect with the public Verde Lynx bus system, which does not travel any closer to the Enchantment, he said.

According to their schedule, the Verde Lynx operates between Cottonwood and Sedona seven days a week, but only from 6 a.m. and 7:15 p.m.

“Our Enchantment shuttle is completely free to employees,” the recruiter pointed out. Employees can “hop-on, hop-off,” take it in from Clarkdale and just go shopping at Walmart.

Osborn said the Enchantment has a fleet of vehicles shuttles employees, including a big white bus that holds about 35 employees and a variety of smaller vans.

The Enchantment Resort, which also includes the Mii amo Spa at the resort, has 550 to 600 employees depending on the time of the season, Osborn said, and that does not include the employees at the famous Seven Canyons Golf Course also at the resort.

Thus, the Enchantment is one of the largest resorts in Sedona, and one of the city’s largest employers.

Osborn does not know of any other resort in Sedona which is running a free bus service for employees. He said they have considered expanding the service to Flagstaff.

Osborn said they run about six or shuttles each day. No matter what shift an employee has, there is always a shuttle option available, he said, because the shuttle schedule is designed around the Enchantment employees.

The employees love to have this option because some don’t have transportation, or their car breaks down or they want to save money on gas, Osborn pointed out.

Also, not as many vehicles will travel to the Enchantment if they ride the bus.

“Parking is limited,” he said. “We got new projects coming up that will make parking even more limited.”

Osborn said the Sedona is not a place that most of the Enchantment’s workforce can afford living, so many choose to live in Cottonwood, Camp Verde or other Verde Valley towns.

Some employees drive to the bus locations and leave their cars in Cottonwood near the bus stops.

“We’re really just trying to be creative, do everything we can and treat our staff well, and get people to want to work here,” Osborne said,

As a recruiter, he said Sedona is a tight labor market and he’d have a tough time filling positions without the shuttle.

Many people from Cottonwood applying for a job at the Enchantment are hesitant because they don’t have transportation.

The Enchantment bus “eases those worries,” he continued.  “That’s a huge plus for people in Cottonwood” as well helping the Sedona resort fill its workforce needs.