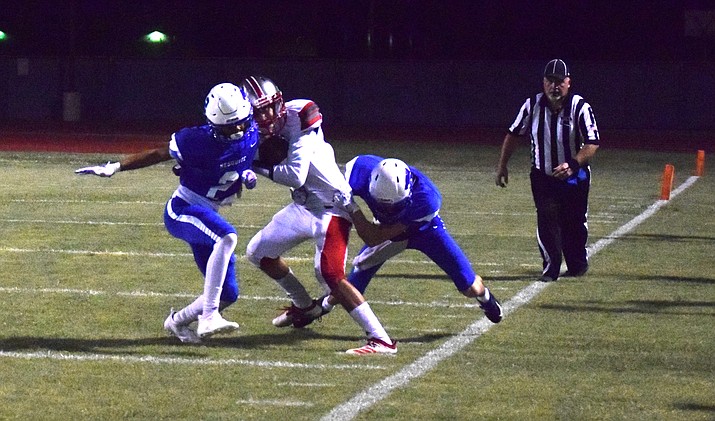 Mingus sophomore Freddy Jimenez gets pulled out of bounds during the Marauders’ 44-0 loss at Gilbert Mesquite on Friday night. VVN/James Kelley

“Overall there’s some positive things,” Mingus head coach Robert Ortiz said. “We moved the ball, we just keep shooting ourselves in the foot, too many drive killers, you can’t have third and one and then false start, dig yourself a hole that you can’t dig out of. Defensively we got guys in position, just tackling right, we’re going to have to get back to that on a daily basis.”

The Marauders fell behind 13-0 in the first quarter and trailed 38-0 at the half.

“We got a lot of young guys, you got a sophomore in Angel Alvarez playing his first varsity football game — playing his first high school football game this year and comes away with an interception, so we got a starting sophomore linebacker that’s making the right reads, one or two steps late, starting to figure it out though and it’s a bout putting it all together,” Ortiz said. “Right now we got eight, nine guys in position or eight nine guys doing their job, we’re missing the second or third guy right now. If we can get all 11 guys on the same page, this is the third week in a row where we’re just as athletic or if not more athletic than the team we’re playing, we just can’t get everybody to do their job at the same time right now.” 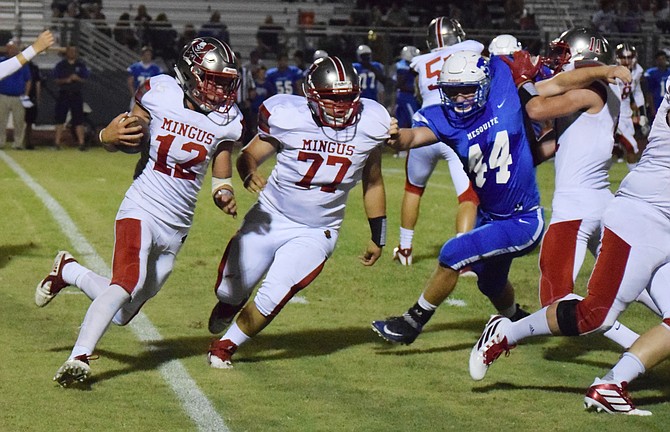 The Marauders’ trip to Mesquite was third straight road game to open the season and their seven consecutive away game overall. Mingus Union’s last home game was Oct. 12, 2018.

The Marauders close out their non-region schedule by hosting Chandler Seton Catholic on Friday. Ortiz said getting the Marauders finally in a normal routine where they don’t have to travel far and deal with that extra schoolwork or how holiday weekends alter their schedule will be pleasant.

“It’s gonna be nice man, we tried to condition our kids by going to Cali camp and getting them on the school bus down to Phoenix, on a charter bus to a long drive to California to get them ready for these three games but it’s tough, they’re long trips too,” Ortiz said. “Combs is a three, three and a half hour ride, Show Low is four, four and a half hours, this is another two and a half, three hours for us so it’ll be nice to get the boys settled in at home; almost forgot what it’s like to play a home football game (laughs). So it’ll be a good thing, I just hope that they remain and stay positive because there are things that they’re doing right, it’s just one or two guys here and there that are costing the rest of us and we gotta be able to get all 11 guys playing together, playing as a team. Nobody’s playing as an individual, it’s just one or two individuals at one time that kinda cost ya.”

Mesquite junior quarterback Ty Thompson was 19-for-25 for 308 yards and five touchdowns with one interception. The Wildcats rushed for 211 yards and had two 100 plus yard receivers.

In their second game, the Marauders fell 56-23 at Show Low.

“They got a killer atmosphere honestly,” Ortiz said “It’s a cool little spot to play. We knew it was going to be a hard nosed football game, kinda like played last year, they’re gonna fight for four quarters and they’re gonna line up and say ‘hey we’re better than you’ and that night they were. Athletically we were there just again a couple missed tackles here and there, one or two guys out of position Ortiz said he isn’t concerned about the young Marauders losing confidence.

“The young guys for the most part are really stepping up,” Ortiz said. “We know what we’re asking of them, I mean you got a lot of sophomores that are playing varsity right now that just haven’t had the experience and they’re getting it week by week but those guys are the fighters because we know what we’re asking. We know they’re gonna make mistakes but we need the juniors and seniors to bail them out and I don’t worry about those sophomores losing their confidence what I worry about the most is everybody kind of taking that back seat and going ‘okay well it’s not me’ and that’s when they become an individual.”

The Marauders face Chandler Seton Catholic Prep on Friday at 7 p.m. in their home opener.

“We’ll go back at it this week, we’ll have a home game against a team that’s very similar opponent to ourselves,” Ortiz said. “It’s definitely a winnable game. It’s just a matter of team morale and if they can play as a team.”

Ortiz said he is hoping the Marauders continue to get strong support.

“I think it’s gonna be important for the community to get out and show their support for these young guys because like I said, they are fighters, they’re not just fighting for me, they’re not just fighting for themselves, they’re fighting for our entire football team and they’re fighting for our community,” Ortiz said. “So what I would really like to see is the community come and rally behind these guys. I know that’s asking a lot right now because who wants to go to a football game when the team’s 0-3, but if we can get as many people to come out and show their support for these boys, I think that’s gonna keep their morale up too, that the boys know that people are interesting in what they’re doing and what they’re trying to put together. They really are trying, like I said, we’re close, we just gotta finish out.”