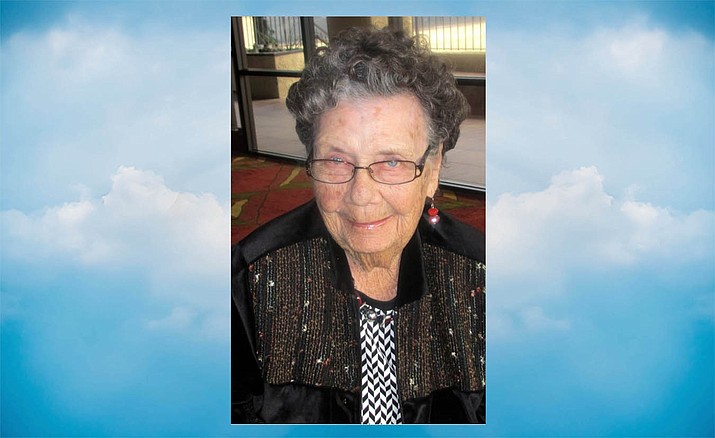 Born September 25, 1920, in Arcadia, Kansas she grew up in Hume, Missouri, along with her brother, James O. Harris.

She graduated from high school at the age of 16 and in 1939, at the age of 19, she was working in Detroit where she met the man (Charles L. Henry) that would become her husband after knowing him for only three weeks. The marriage lasted for 54 years until his death in 1993.

Their first-born child (James Lee) died in 1944 at the age of 3 in a tragic drowning accident. In 1947 Charles and Velva moved to Tucson, Arizona, with their two sons (Bob and Richard) where Velva worked as an office manager at Apache Powder Plant, Hughes Aircraft and the Plumbers-Steamfitters Union.

In 1955 a daughter (Debbie) was born and in 1960 another son (Donald) completed the family. In 1961 they bought property in Lake Montezuma and built the house they retired to in 1978.

A family celebration of life will happen at a later date but if you want to honor Velva with a donation please consider giving to Valley View Care that provided exceptional end of life care to her.

To make a donation contact the Northern Arizona Healthcare Foundation at (928) 773-2093.