Later transit service on its way to Cottonwood 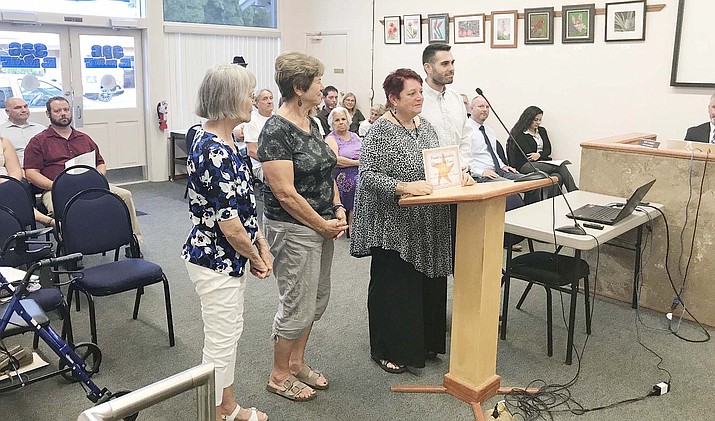 Members of the original Verde Valley Homeless Coalition Board of Directors came to Tuesday’s Cottonwood Council meeting to thank the Council for funding one annual cycle of Coalition expenses through a $12,000 CDBG grant. From the left are Joy Mosley, Carol Quasula, Raena Avalon and Ryan Block. VVN photo/ Jason W. Brooks

COTTONWOOD —The approval of a field supervisor position will help pave the way for later bus service in the Cottonwood area.

With an Arizona Department of Transportation grant and the City of Sedona to fund all of the cost of the position, the Cottonwood Council merely had to approve having the full-time supervisor position Tuesday to place it on the Cottonwood Area Transit’s organizational chart.

The position will allow the transit buses to run later than 10 p.m., as there will now be a morning supervisor, an evening/late-night supervisor and a mid-day supervisor whose shift overlaps the other two shifts.

Cottonwood Area Transit Manager Bruce Morrow told the Council the service will allow those who work late to get home using the Cottonwood Connect shuttle. He said some riders were able to use the transit service to get to certain job locations but work late enough that their shifts were ending after the last transit routes were done for the evening.

“We’re not going to be picking people up at that point in time, anywhere except the library,” Morrow said. “A single shuttle will take people to their houses or to bus stops that are close to their homes. It will be a shuttle that’s just there to get people home from Sedona.”

Morrow said the City of Sedona is also funding the cost of additional shuttle services. City Manager Ron Corbin said the new field supervisor position will not be filled until the city has a written commitment from Sedona that it will pick up all of the costs of the increases not funded by the ADOT.

Corbin said the procedure was merely to add the field supervisor position to the payroll and it won’t cost the City of Cottonwood any money; if there turns out to be additional costs to Cottonwood, he’ll bring the position back to the Council.

The position was approved by a 6-0 vote; Councilman Doug Hulse wasn’t at Tuesday’s meeting.