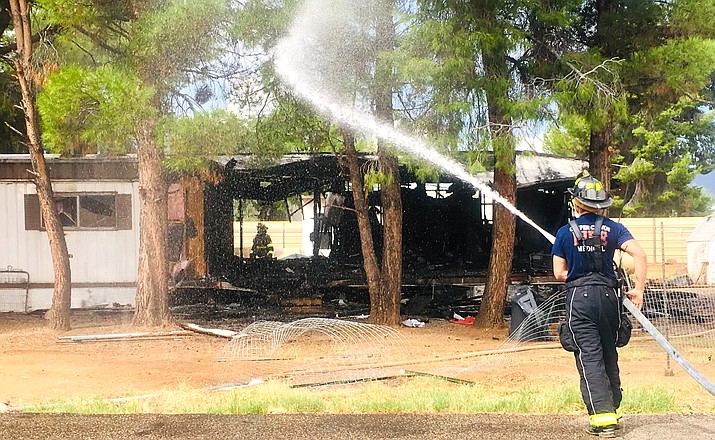 Copper Canyon Fire and Medical responded to a house fire Saturday morning on Mockingbird Lane in Verde Lakes. Although the structure was a total loss, the occupant and her dog were able to escape, uninjured, Copper Canyon Fire Chief Terry Keller said Monday. VVN/Vyto Starinskas

A mobile home was destroyed an hour ago... - Verde Independent by verdenews

CAMP VERDE – A mobile home was at a total loss following a fire Saturday morning in Verde Lakes. But the occupant and her dog escaped without injury. 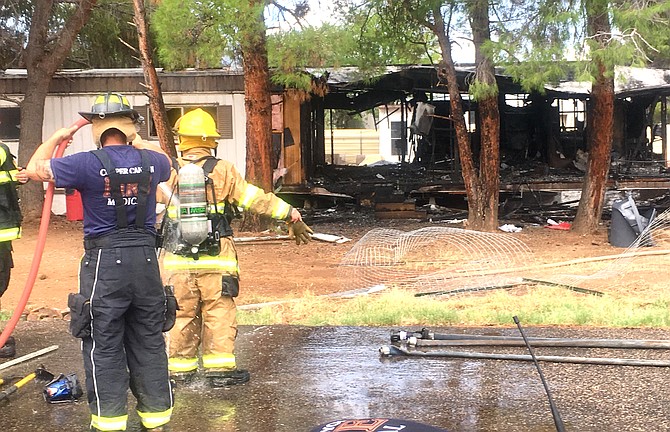 Copper Canyon Fire and Medical officials said this Verde Lakes Estates fire was quickly extinguished, with no damage to surrounding structures, but the mobile home was a total loss. VVN/Vyto Starinskas

As Copper Canyon crews approached the fire, they “saw heavy black smoke in the area and called for working fire,” Hopf stated in his report. “Once arrived on the scene, Copper Canyon personnel found [an] older double-wide mobile home 50 percent involved with fire that had vented itself from the windows on the front right corner of the structure.”

According to Hopf, the homeowner stated she was “in the back of the mobile home when she heard a boom in the living room area.”

“When the occupant went to investigate the noise, flames on the couch and surrounding area had broken out the window,” Hopf stated. “The occupant stated that she grabbed her pet and went out the front door to get the garden hose to put the fire out.”

The fire was quickly extinguished, Hopf stated, with no damage to surrounding structures.

Copper Canyon Fire Chief Terry Keller said Monday that “from the description provided by the property owner, [the fire] may have been precipitated by an overloaded electrical circuit.

“One firefighter did suffer somewhat from overexertion due to the heat, but was able to recover and continue the shift,” Keller also said.

Total loss, Hopf stated, was “due to fire, smoke and water damage.”