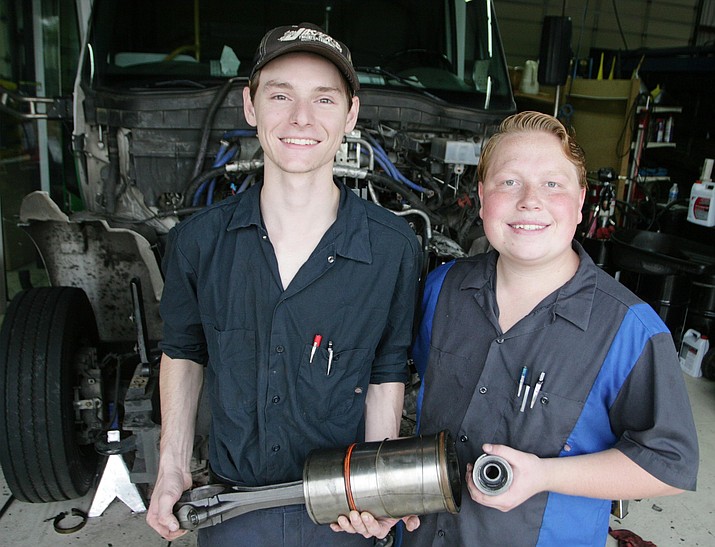 Ryan Rozeboom, left, and Shawn Mayo, graduates of Mingus Union High School, work at Hansen Enterprises Fleet Repair. The friends would one day like to own and operate their own repair shop. VVN/Bill Helm

VERDE VALLEY – It’s not unusual for an automotive technician to be A.S.E. master certified.

But most automotive technicians – mechanics – haven’t reached that point until they are 30, said Ralph Fobair, career and technical education director at Mingus Union High School.

One of his former students, 20-year-old Ryan Rozeboom, has already earned the certification, which stands for Automotive Service Excellence. Another, 21-year-old Shawn Mayo, has three more tests to take and expects to pass them by year’s end, Mayo said Monday.

“Ryan has no student debt, has not attended any formal instruction beyond the in-service trainings his employer offers since he left Mingus,” said Andy Hooton, automotive instructor at Mingus Union. “Ryan is a stellar example of what CTE can do for the youth in this community.”

Rozeboom graduated from Mingus Union in 2018, Mayo in 2017. Mayo completed Yavapai College’s Automotive Technology Certificate program at Mingus in ‘16. Hooton said that Mayo is “one of the kindest and most genuine people I know.”

“I greatly respect the choices he has made to set his future on such a positive path,” Hooton said.

A year apart in age, Rozeboom and Mayo met at Mingus Union when the former was a freshman and the latter was a sophomore.

They learned that day on a bus trip to an automotive competition that each was serious about his plans to be mechanics.

Today, they work in Camp Verde at Hansen Enterprises Fleet Repair – HEFR. Their boss, Davis Wittmayer, said that Rozeboom and Mayo are the best mechanics he has encountered from Mingus Union’s auto repair program

“Both have a good work ethic, a good attitude, a good aptitude,” Wittmayer said. “They show up every day ready to go. They’ll do anything I ask of them. They’ll stay late if they need to.”

Wittmayer said he hires his mechanics based on three criteria: attitude, aptitude and knowledge.

The “heavy-line work” is what Wittmayer often assigns Rozeboom, such as changing engines and transmissions.

“Ryan picks things up really quickly,” said Wittmayer, who also pointed out that Rozeboom and Mayo “work together very well.”

“They’re friends to start with,” Wittmayer said. “And their personalities, they enjoy helping people. We don’t just repair vehicles. We help people with their transportation needs.”

Not only do Rozeboom and Mayo work hard, but they want to stay in the Verde Valley.

“Both are amazing young men,” Hooton said. “Both demonstrate integrity, grit and desire to succeed without leaving the Verde.”

Other than two years in Hawaii, Mayo has lived his entire life in the Verde Valley. He said Monday that he has no plans to live anywhere else. In fact, he and Rozeboom talked of one day being their own bosses.

“Ever since day one, we’ve wanted to own our own business,” Rozeboom said. “Focusing on the everyday stuff allows us to be prepared to do that.”