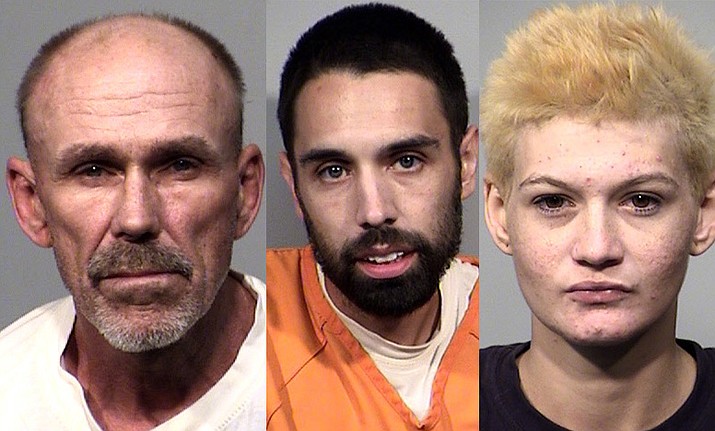 CORNVILLE – This is a case where a detective’s knowledge of a community and some of its criminal players paid off.

Sept. 8, Yavapai County sheriff’s deputies were dispatched to the 1100 block of East Willow Point in Cornville regarding a burglary report.

According to a YCSO news release, the victim reported that suspects had entered two homes and several outbuildings on the victim’s property, and stole numerous items. Deputies learned that the victim’s neighbor was also burglarized and very likely by the same suspects.

Property stolen included a 2008 Polaris Ranger, homemade trailer, several bicycles, televisions, a lawn mower and large quantity of tools. According to the release, the items were valued at more than $20,000.

YCSO assigned a detective who specializes in property crimes to the case. After reviewing a complete list of stolen property, the detective recalled a previous investigation that involved 55-year-old James Hawthorne of Cottonwood, YCSO reported.

“Some of the property stolen in the current burglaries is not typical of items stolen,” the release stated. “Such items were recovered during a previous service search warrant at Hawthorne’s house.”

On Sept. 10, the county’s detective drove by Hawthorne’s house in the 2700 block of Yuma Circle in Cottonwood, and saw “a side-by-side vehicle looking similar to the stolen Polaris Ranger,” YCSO reported.

YCSO contacted the owner of the Ranger, who “supplied details on some of the customization he had done,” YCSO reported. Detectives returned to Yuma Circle and with the aid of binoculars, were able to confirm the vehicle on Hawthorne’s property belonged to the victim.

Detectives attempted to contact Hawthorne at his home, YCSO reported. Although detectives could hear someone in the house, there was no answer.

“The detectives maintained a view of the front of the house while a search warrant was completed,” YCSO reported. During this time, a vehicle pulled into Hawthorne’s driveway and two occupants were detained, including 28-year-old Rimrock resident Vincent Heslin. The case detective knew Heslin, who had served prison time for a prior burglary conviction.

When the warrant was served, detectives found Hawthorne’s home unoccupied, but found the house “filled with tools, bicycles, antiques, and other miscellaneous items,” YCSO reported.

The tools reportedly covered the living room floor “and there were power and hand tools piled behind the couch,” YCSO reported. “The detective noted you could hardly walk through the room without tripping on mounds of tools.”

Detectives reported that they found “numerous items that were stolen from the burglaries in Cornville over the weekend.”

During a search of the car that Heslin was riding in, detectives found drug paraphernalia as well as stolen tools and personal papers belonging to one of the burglary victims, the release stated.

The other occupant in Heslin’s vehicle, who had been detained, “provided part of a puzzle implicating Heslin and Hawthorne in the burglaries,” YCSO reported. Detectives discovered that 20-year-old Jessica Warwick from Cottonwood also allegedly participated in the burglaries.

Heslin was arrested and booked into the Camp Verde Detention Center on charges including possession of burglary tools, residential burglary x2, vandalism, theft, and vehicle theft. He is being held without bond on a probation violation.

Sept. 12, YCSO found Hawthorne during a traffic stop, then arrested him. “He was cooperative and provided details as to his involvement and those who assisted him in both burglaries,” YCSO reported.

Hawthorne was booked into the Camp Verde Detention Center on charges including burglary x2, theft, weapons offense, vandalism, vehicle theft and possession of a controlled substance. Hawthorne was in possession of meth at the time of his arrest. He is also being held without bond due to a probation violation.

Sept. 12, YCSO found Warwick in the Cornville area and arrested her on a Cottonwood warrant, YCSO reported. Warwick was charged for her involvement in the burglaries and booked into the Camp Verde Detention Center where she remains on a $10,750 bond.

The investigation continues into the property recovered and other crimes that may be linked to the suspects.